There had been a lot of rumors regarding Samsung’s mid-range phones, the Galaxy J4 Plus, and Galaxy J6 Plus. Moreover, the phones have officially been certified by the Bluetooth SIG too. The good news is that the wait is over and the amazing new members of the Galaxy J series have finally made their way to the market. Samsung has finally extended their Galaxy J series with the arrival of the budget-friendly Galaxy J4+ & J6+.

It is very difficult to differentiate between both handsets because both of these handsets are very much the same when it comes to their size and some of their hardware. So, at first look, you may not be able to differentiate between the Galaxy J4+ and J6+. Furthermore, both smartphones feature a similar 6-inch HD+ Infinity display (1,480x 720 pixels). They are powered by a quad-core Snapdragon 425 processor clocked at 1.4GHz. 3,300mAh battery will keep their lights on.
However, there are few specs that separate them apart. The Galaxy J6+ features 4GB of RAM and 64GB of internal storage while the Galaxy J4+ has 2GB of RAM and 32GB of onboard storage. The J6+ comes with a face recognition feature and a side mounted fingerprint scanner with a glossy finish design. However, there’s no fingerprint scanner found on the J4+. 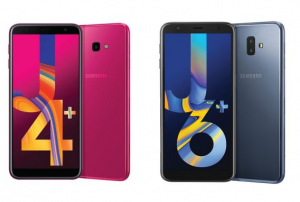 The two smartphones also diverge in terms of cameras. The Galaxy J6+ gets a 13MP+5MP dual camera setup on the rear. Moreover, it supports live focus and 8MP front camera for selfies. On the other hand, j4+ has a more modest setup with a single 13MP camera on the rear and 5MP camera at the front. 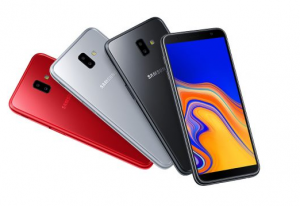 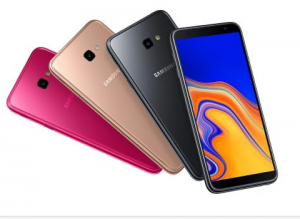