We all know that according to some previous reports it was expected that Samsung will launch its new P series by unveiling P30. However, this was not the case. Later on, some reports claimed that the South Korean company will not reveal the new series. Instead, it will be a part of newly expandable Galaxy A-series. Furthermore, its new name was also decided to be A6s. Then the smartphone, Samsung Galaxy A6s appeared on TENAA revealing its some specs. Recently, the Galaxy A6s got certified by the Wi-Fi Alliance ahead of its expected release next week. Moreover, Galaxy A6s WiFi Certification confirmed its outsourced production.

Company May Shift Its Production To Third-Party Manufacturers, Starting From Galaxy A6s

Due to the increase in labor costs and weak performance in China, though, it was recently reported that Samsung will shift some of its production to a third-party manufacturer, starting with the Galaxy A6s. The WiFi listing confirmed that the third party company will be Wintech which was previously expected. 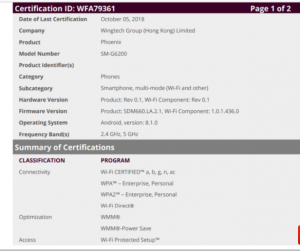 In addition to that, the presence of a Snapdragon 660 is also revealed alongside the information about the manufacturer. It will reportedly be coupled with a considerable 6GB of RAM and the choice of 64GB or 128GB of internal storage. Furthermore, the device will feature a large 6-inch AMOLED display. A massive 3,300mAh battery will power the phone up.
Furthermore, the phone will have a vertical dual camera setup on the back with two 12 MP sensors. Also, the selfie lovers will have a 5 MP camera at the front.  The phone will come with pre-installed Android 8.1 Oreo rather than the newer Android 9 Pie. However, we are still not sure about the specs as the company has no words about the device yet.
The Samsung Galaxy A6s launch date is quite near. It will make its way to the market on Thursday, October 11 alongside the larger Galaxy A9s.