Samsung and Apple are the big names of the IT world. Both the companies have gained fame through their quality products whether smartphones or other gadgets. They are the best rivals of each other as both try to do better than the other. In the same way, both launch their products revealing special features in them that not only excite the world but also produce noise throughout the IT world. The IT world is currently eager for Samsung to announce the Exynos 2200. That, if all goes well, will be a wonderful CPU/GPU mix. While the SoC is expected to be shown tomorrow, a new rumor claims that it will be clocked higher than Apple’s famed Bionic A15, potentially making it speedier.

Exynos 2200 is About to Become the Most Impressive Mobile SoC

The information comes from Ice Universe, a well-known tipster. It believes that the AMD GPU inside the Exynos 2200 will run at 1,300 MHz. This is slightly faster than the A15 Bionic’s processor speed of 1,200 MHz. However, because both designs are distinct and operate on multiple platforms. We can’t properly compare performance differences solely on clock speed. 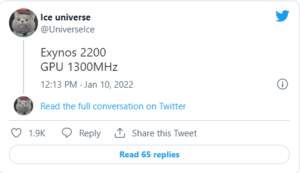 Although the clock speeds may appear insufficient, it’s possible that Samsung mobile company underclocked the AMD GPU in the Exynos 2200 to maintain thermals within control. There’ve been rumors that the GPU can run at 1,800 MHz, however, this will demand a significant power budget. This isn’t good for a smartphone.

There is currently very little information available on the Exynos 2200, or the GPU for that time. We already know that the GPU will enable hardware-accelerated Ray Tracing, but also that the SoC will be more than simply a label on its own.