Ufone, an Etisalat group company, has collaborated with Buksh Foundation, a microfinance organization, to bring convenience through electricity by becoming a part of the latter’s ‘Lighting a Million Lives’ campaign. The pilot project has been initiated in two villages in Chiniot and through this campaign Ufone intends to facilitate the access and use of solar lighting devices among Pakistan’s rural communities as part of its CSR program.

A Solar Charging Station with five solar panels and five junction boxes has been set up in two villages, Thata Deva and Kalas. Lanterns have been distributed within households and these may be recharged through these solar panels. This initiative will remove the need for kerosene oil lamps and therefore, reduce carbon emissions into the atmosphere in the long run. It also aims to empower women as these stations will be run by selected women from the two villages, where they will be in charge of renting out and selling equipment at the charging stations. Considering that about 43% (80 million people) of the total population of Pakistan lives without access to electricity, this will really illuminate the lives and homes of many village residents.

Mr. Asher Yaqub Khan, Chief Commercial Officer Ufone said:
[pull_quote_center]Pakistan is facing a serious power problem. “A large section of the population in Pakistan’s rural areas is deprived of energy supply. Our partners at the Buksh Foundation are providing the technical support to boost energy security in rural areas like Chiniot where we have connected several houses through Solar Based Domestic Lighting Systems.[/pull_quote_center]

Fiza Farhan Chief Executive Officer Buksh Foundation said:
[pull_quote_center]Buksh Foundation is extremely proud of this new partnership with Ufone which promises immense impact in the targeted communities as we provide them with Solar charging stations, while furthering women empowerment and economic activity in the areas. With the support of Ufone we will be able to provide clean energy to those households that were earlier living in the dark; enabling them to get access to better education, health, economic activities, mobilization- simply a better life. This is the way forward towards the paradigm shift in CSR for larger corporates towards real time developmental impact – which is certain to lead to real change in Pakistan.[/pull_quote_center] 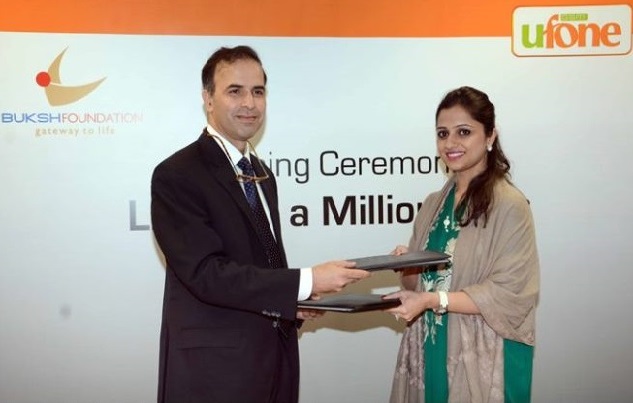