“We take our users’ security and privacy very seriously, and it’s critical to us that they feel confident and protected when using Viber,” said Michael Shmilov, COO of Viber. “Because of this, we have spent a long time working on this latest update to ensure that our users have the most sophisticated security available and maximum control over their communications. We will continue to make this an ongoing priority as digital communication evolves.”

Rolling out globally over the coming weeks, users will automatically be protected by end-to-end encryption in all communications on their smartphone once they have upgraded to the latest version of Viber – v6.0 or higher. Users who are also using Viber on an iPad, Android tablet or desktop will be prompted to re-connect it to their phone using a QR code. 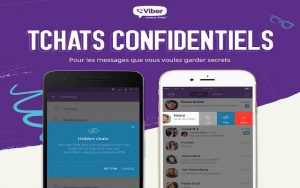 All communications can benefit from an additional layer of security through account verification. Users will see a color-coded lock on the right hand side of the screen indicating the level of security:

Users will now also be able to hide specific one-on-one or group conversations from the ‘chats’ screen so that no-one knows they exist and access them using a four digit PIN. Users can hide the conversation by tapping on the info screen for a particular chat. It will then ask for a four digit PIN or, for iOS users, provide an option for a fingerprint. Users will be notified of a message in a Hidden conversation without the text of the message, or who it is from, appearing on the screen.

This is not bi-directional, meaning if one user hides the conversation, nothing will be changed on the recipient’s side.

This latest update, along with the ‘Delete’ feature – which allows users to delete messages on the recipient’s phone even after they’ve sent them whether the person has seen it or not – demonstrates Viber’s increased focus on putting its users in control of their privacy and personal communications.