Apple has confirmed its launch event on October 15, 2021, which means it is going to be held tomorrow. The company is expected to announce new MacBook laptops, AirPods headphones, and launch the most awaited Watch Series 7. Everyone knows that Apple Watch Series 7 will have a larger screen and offer fast charging along with improved design. However, it is something that everyone was expecting so it would not be a surprise for any one of us.

Just like Apple introduced a blood oxygen sensor in Series 6 last year which aroused everyone’s excitement since it was not expected, the inclusion of new features to Watch series 7 will provide more ease to people for performing everyday tasks.

Apple had introduced series 7 in its September 14 launch event when it launched iPhone 13 series. Since it is going to launch tomorrow at Apple’s event, people are quite curious to buy it so they want to know every single new detail associated with it. Though no one has got hands-on experience however through the features it seems that series 7 will come up with a light update to the series 6 and people might be considering it to buy if their watch has become several years old.

So if you are planning to buy the Apple watch series 7, here are some of the reasons that why you should be actually going for it.

So this watch is getting a new QWERTY keyboard due to its larger screen. The screen of Series 7 is almost 20 percent bigger than its predecessor. The best thing about this keyboard is that users would be able to easily type as they do on their mobile or computers, hence saving time. 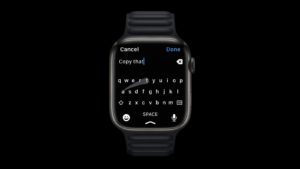 Through this keyboard, one would be able to write by clicking each key or can use the QuickPath feature to swipe between letters just like our smartphones. Due to this, sending longer and complex texts would become easier and less time taking.

For the very first time, Apple Watch is getting a redesign since it came up with series 4 in 2018. The watch has a larger screen ie;  41-millimeter and 45mm as compared to the 40mm and 44mm sizes that were previously 0available on the Series 4 till Series 6. The new screen as revealed above is  20% larger than the Series 6. 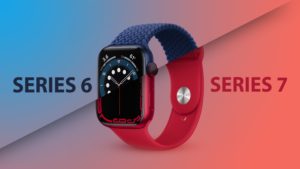 The frames of the screen are 40% smaller than the previous models which have impacted the expansion of the screen size. Due to the larger screen, users especially elders would be able to read the text clearly. Furthermore, with large screens series, 7 would be able to display 50% more text without scrolling, which will further make reading text messages, and emails, easier.

A brighter screen in always-on mode

The main emphasis of Apple in these series has remained the visibility of the screen. Another effort towards it is making the screen more visible in always-on mode.  With an always-on mode, users would be able to gather information more quickly.

Since the screen is 70 percent brighter in Alway on mode, the indoor usage of this watch will put less strain on your eyes. It means now you would be able to see the important thing like time, activity rings and your scheduled meeting at just one glance. 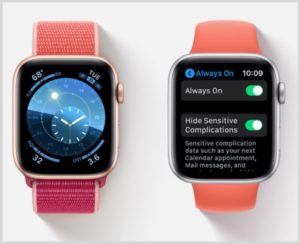 As far as outdoor is concerned, the company has not shared words regarding it but it seems this step is taken in order to make Apple’s watch screen appear the same whether in asleep mode or in use. In order to use this feature, you will have to make sure that the always-on display settings are turned on which can be easily done by pressing the settings icon and scrolling down to Display & Brightness and tapping Always On.

The battery of the Apple watch series 7 will last as long as series 6 lasted, but Apple revealed that it will charge 33% faster than its predecessor. It means it will take 45 minutes to charge from zero to 80 percent and 8 minutes of charging will enable 8 hours of sleep tracking. 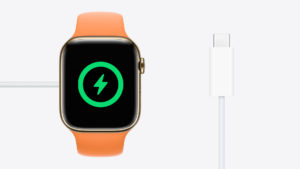 The introduction of new native sleep tracking will require more battery life which is granted in this model. So with this user will be able to quickly top-up the watch’s battery in just a few minutes. Furthermore, Apple is including the ability to measure respiratory rate during sleep with its new WatchOS 8 update.

It seems like Apple wants everyone to have a healthy lifestyle due to which exercise has become one of the most vital focuses of the company. Due to this, Apple has made this new addition more durable and due to its brawnier build, it is suitable to be used outdoor.

Furthermore, the series 7 watch is rated for IP6X dust resistance and is coated in a crystal cover that is 50% thicker than that of Series 6. The company has paired this feature with fall detection that can differentiate between falling off a bicycle and a different type of accident. Furthermore, it can detect outdoor cycling workouts.

However, these things are revealed by Apple and we cannot be 100 percent sure about it until we carry on its durability test.

Moreover, it also shows that Apple is taking its watch series quite seriously and is ready to compete with other big players in the market. By introducing something like this for sporty people, the company has opened more ways towards generating revenue and making the life of people easier who previously had to go for other durable options in order to meet their needs such as rock climbing, GYM, and sports.

While the launch is just one day ahead, we can expect that the company might surprise us thing time as well but revealing a new and unexpected feature. So let’s wait and watch what it has planned for us.