A few days back, we came to know that Samsung and Xiaomi are working on a tri-fold smartphone, we have come to know that Microsoft is also planning to launch a multi-panel device that will adapt a trifold kind of design. As far as Samsung is concerned, we learned that the company filed a patent with WIPO (World Intellectual Property Organization and this device will be another addition to the foldable family with a slightly different design.

Microsoft seems to adopt the idea of the Samsung Trifold device and come up with some different devices since previously we have not got any competitive device from the company.  Regarding the design which is registered with US Patent and Trademark Office (USPTO) is circulating on the internet showing a device having two hinges. When it is opened up, it shows a massive screen that has three different sections. 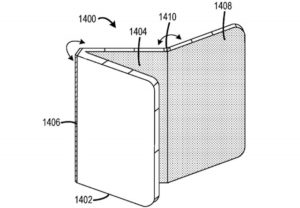 Like Samsung Trifold, when this device will be closed it will serve a normal phone with a reasonable screen. On the other hand, Microsoft has come up with a device that has four under-display camera sensors. The logo is displayed by default on the camera which is not in use. Each camera will have its own color filter, helping users capture better images.

Samsung will include S pen support, one Under display camera, and an HDMI connector. On the other hand, Microsoft has tried to think out of the box by including four under-display cameras that can be used simultaneously.

Also Read: This is an Overview of the Samsung Trifold Smartphone