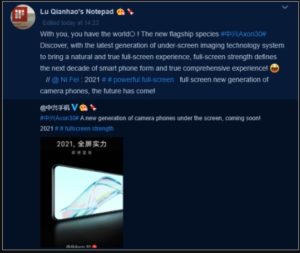 In addition to the upcoming launch, the poster also includes a picture of the smartphone, which gives us a glimpse of “what is coming”. The teaser picture reveals that the Axon 30 will come without any notch or hole punch, will have a full-screen design. ZTE’s next generation will have under-screen camera technology in the handset. The image clearly shows the selfie camera under the display, which gives the device a screen-to-body ratio of approximately 100%.

According to an image published by ZTE, the Axon 30 apparently seems extremely high-end device. The visual effect of the display seems outstanding, Without a notch or cut-out. This is highly attractive for phone lovers who like a fully symmetrical design. 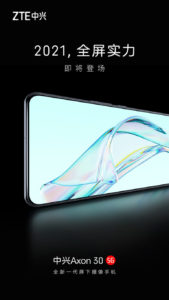 The Axon 30 5G is the first handset in the market to include a 20GB RAM capacity alongside the under-screen camera technology. Lu Qianhao, ZTE CEO recently hinted at an upcoming 20GB phone from the Chinese brand.

Moreover, a new ZTE model ZTE A2322 was recently permitted the network certification. The list shows that the smartphone has a standard 55W fast charging support. The Axon 30 5G will also include the same. Moreover, the smartphone exact launch date has not been revealed yet.

You may be also interested in: Pakistan’s Exports Increased to Several Countries in FY21