One of the famous Turkish Actress Esra Bilgic, who played the lead role of Halime Sultan in the Turkish drama ‘Ertugrul Ghazi (Dirilis Ertugrul)’ aired on Pakistan Television (PTV), has now become the brand ambassador of Pakistan’s No. 1 smartphone manufacturer, QMobile. Esra Bilgic has gained huge popularity because of his beauty and incredible acting in the Dirilis Ertugral Series.

QMobile has announced on its Facebook account that Halime Khatoon of Ertugrul will be the brand ambassador of its View Max Pro Series. The company posted;

QMobile is proud to announce #EsraBilgic famous for playing Halime Sultan from #Ertugrul as its ambassador for View Max Pro series making QMobile the first Pakistani brand to have any celebrity from Ertugrul phenomenon on board. 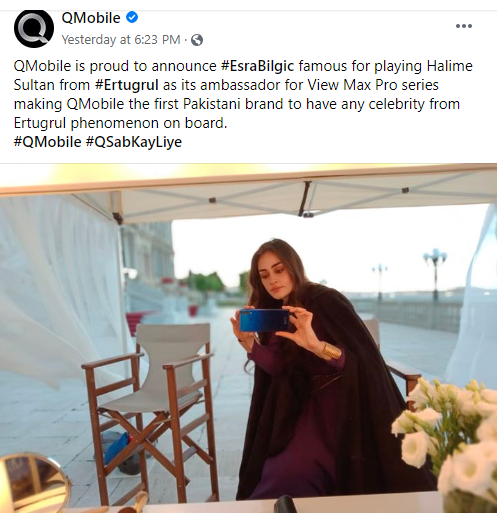 Thanks to QMobile’s post, we came to know that one brand is QMobile. It is true that QMobile is the first Pakistani brand to have international celebratory from the popular drama serial. No doubt, Esra has gained huge popularity in a very short time in Pakistan.

As far as the specs of the phone are concerned, we currently do not know much about the phone. The only thing we came to know about the phone is that it will have a triple rear camera setup. Also, the phone has around 6.6-inch display. Surely we will get more information about the phone in the coming days.