When will Far Cry 6 be released on PC? Another big evil has seized control of a typically gorgeous environment in Ubisoft’s open-world franchise, which means we’ve got weapons and vehicles to steal, questions to answer, and another unsavory character to learn a lesson from.

Far Cry 6 will be released for Xbox One, Xbox Series X|S, PS4, PS5, PC, Stadia, and Luna on Thursday, October 7, however when you may begin exploring the Island of Yara will depend on your timezone. Ubisoft is employing a staggered strategy, releasing the game at the same time (12:01 AM) in all areas, so make sure you have the game loaded and ready to play before then. Here’s when Far Cry 6 will be available in your timezone. 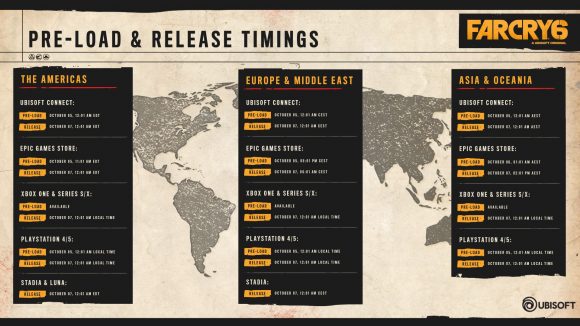 This is not a small game, as you might assume. That’s why, if you’ve pre-ordered, you should consider pre-loading the game when it becomes available from September 5. If you want to play right away, the PC edition is 60GB, so prepare ahead. Of course, it’s always a good idea to double-check the game’s system requirements.

RELATED: Far Cry Preview: The Most Anticipated Game on the Horizon

Far Cry 6 will take us to the tropical, frozen-in-time island of Yara, which is ruled by a tyrant. As you may guess, your role as the main character Dani is to have a battle against the harsh king of the island and reclaim control of your country.

You will take on the role of Dani Rojas, whose gender will be determined by the player. You might recognise the name from Ted Lasso, but this isn’t a crossover, as intriguing as it might be.

Why was the game release delayed?

The explanation is the same as it has been for the most of the delays over the previous 18 months: the COVID-19 pandemic was the primary cause of the Far Cry 6 delay. Game creators spent a lot of time working from home and socially isolating themselves, which resulted in items not being done in time for the intended release date.