Google Assistant is going to be revamped with a new feature named “Guacamole”. Initially in a leak users came to know there is a feature named guac, while users were unsure how this feature will add to a digital helper. Now we have come to know that Guacamole Feature for Assistant helps users to do tasks quickly. These tasks may include turning off the alarm, answering the phone calls without giving instruction “Hey Google”.

Guacamole Feature for Assistant: Here’s What you Need to Know About it

Previously for each and every task, users had to wake up the assistant by saying “Hey Google”. initially it was fun but later on it got extremely annoying to say the same words again and again. With this new mode, we will be relieved. 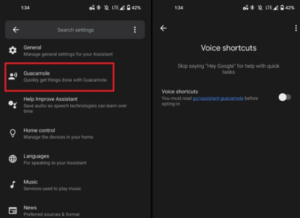 This feature was found in main assistant settings under “Guacamole” where it’s written “Skip saying Hey Google” for quick tasks. It means with this feature, one can cancel a quick alarm by just saying “Stop” or “Snooze”. If a user wants to receive an incoming call, he can easily say “Answer/decline the call” without saying “Hey Google” to wake it up before giving a command.

The search engine, Google was testing this feature internally and was not meant to be shown to users, however, it was all done accidentally. Guacamole will only land for the 12.5 version of Google app beta running on Android 11. Google was keeping this feature a secret however it accidentally released the description of “Guacamole”, ie; “Quickly get things done with Guacamole.”