Google Assistant is a blessing in disguise, especially for people like me who really don’t want to write anything being always tired. You only have to wake up assistant by saying “Ok Google” and have to ask anything you want to know without stressing your eyes or using your hands. Well, it is the best thing ever happened to us, I Agree, but it has a serious issue i.e; linguistic. How many of time you have asked google assistant to search something for you, but instead, it searched something else? Being Urdu speaking, many time when I asked a good assistant to play “wheels on the bus” for my baby it played “wheel on fire”, which was pretty awful. Finally, this issue will b minimised by the introduction of Google Assistant new edit feature.

This feature is very easy and user-friendly. With this feature, if Google is unsure about what you asked it to do, it will underline the word and pop up the “edit icon”. In this way, you can edit it and write that word again for the most favourable answer.

For instance, you have asked the assistant to search Rawalpindi for you which is a city in Pakistan. Still, instead, it shows you result for Rahimyar khan, another city in Pakistan, you can now edit it. By tapping on the city name underlines, it will allow you to edit it by writing it.

Since I have not received this feature yet, lets me demonstrate the feature by a pictorial example.

For instance, you have asked the assistant about Oshkosh, but it gave you results for Seattle. By clicking on the city name underlined will repeat the query in the field on the bottom of the screen; the part of the question that is being edited has a grey background. You can change the name of the city to Seattle, and get the right response. 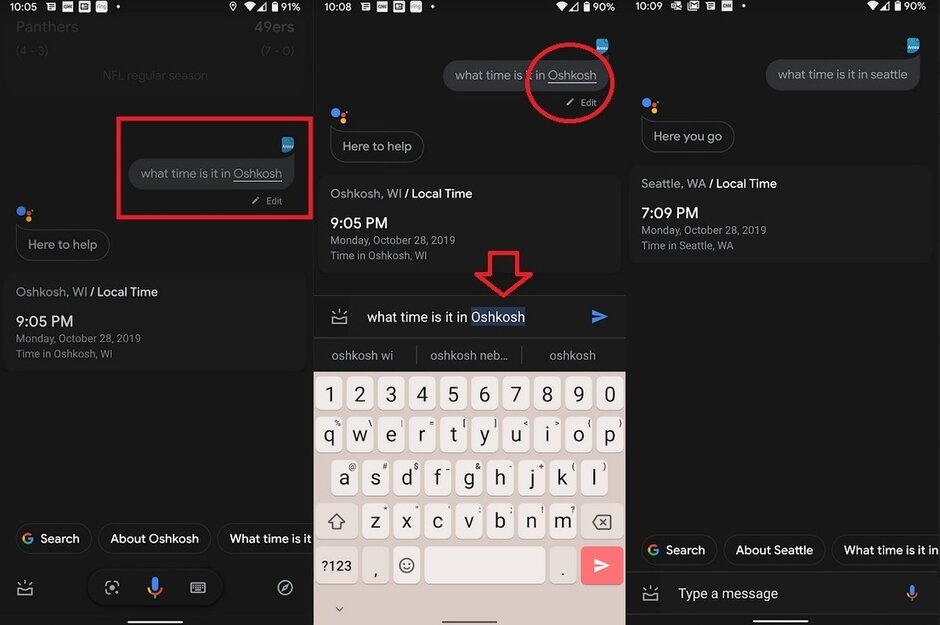