A Huawei smartphone with the codename, LYA-L29 was found on Geekbench having Android 9 with the eight-core processor and 6GB of RAM. Huawei Mate 20 with Kirin 980 Hits 10318 pts in Latest Geekbench Test.

Keeping in view the latest Android version and score, it seems both Huawei Mate 20 and Mate 20 Pro will Huawei’s Kirin 980 chipset.

The chipset achieved a single-core result of 3,390 and a multi-core score of 10,318. The result managed to perform very well in Android competition but stops shy of the iPhone XS’ 11,472. 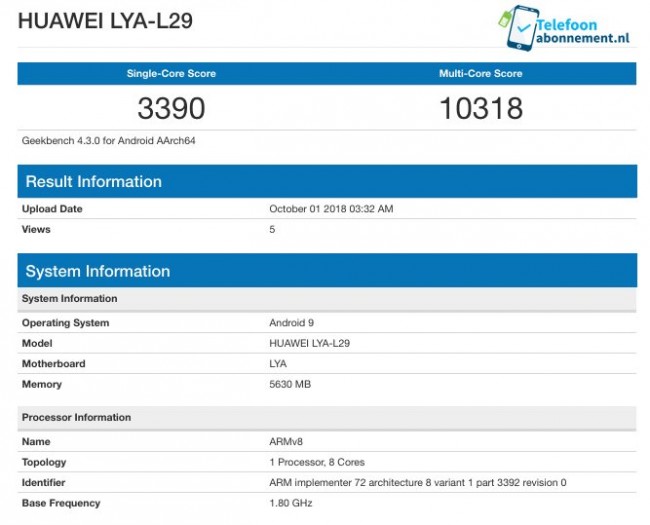 Similar results were observed from Kirin 980 in AnTuTu. Huawei Mate 20 and Mate 20 pro will be unveiled on October 16.

Given the fact that the Kirin 980 would be the fastest but to what extent? The Huawei LYA-L29 appeared on Geekbench with a sample score of 3,390 for the single-core test results and 10,318 points for the multi-core test results. The device’s model name is LYA-L29 that runs Kirin 980 is presumably the Huawei Mate 20, or the Mate 20 Pro. Other specifications highlight that the handset carries 6GB of memory and is running on the Android 9 Pie update.

from the last few days, we are getting certain updates regarding the upcoming flagship Huawei Mate 20 & Mate 20 Pro. Moreover, the company has also been teasing Mate 20 series. Huawei Mate 20 Pro renders also revealed many of its key specs and features.