Huawei, the leading global information and communications technology (ICT) solutions provider, announced its partnership with Liga De Fútbol Profesional (LFP) at an official signing ceremony held in Beijing. The sponsorship will provide another opportunity for Huawei to share its “Make it Possible” message among consumers, following partnerships with some of the world’s top football teams including Germany’s Borussia Dortmund (BVB), Italy’s AC Milan and New Zealand’s Wellington Phoenix.

As part of the contract, in season of 2013 to 2014, Huawei will become LFP’s global technology partner and launch a series of integrated marketing activities worldwide to promote the professional football league. The partnership entitles Huawei to pre-install LFP’s official APP on its smartphones in Spain, enabling people around the country to follow the live LFP information, while Huawei summer camps will give football fans the chance to experience Spanish football culture. The APP is already available on selected HUAWEI smartphone models currently on sale in Spain. In addition to this, Huawei will have access to LFP’s trademark, logo, mascot, group player images and other exclusive assets for use in promotional materials. 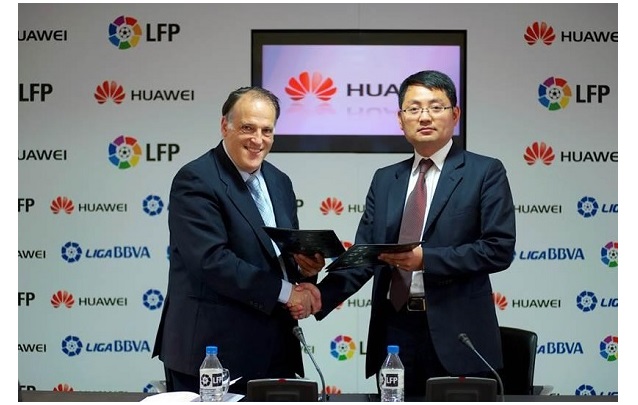 [blockquote cite=”Javier Tebas”] As the one of the top professional football league in the world, we are very pleased to enter into cooperation with Huawei. We believe that this partnership will increase football fans’ passion and excitement for both football and technology
[/blockquote] [blockquote cite=”Hugo Sánchez Márquez”] This is a wonderful partnership and I am sure Huawei smartphones will bring our football fans a completely new experience and create massive excitement in the world, just like football has done!
[/blockquote]

In 2013, Huawei announced a series of football sponsorships worldwide with renowned clubs including AC Milan, BVB and Wellington Phoenix, which has been positively received by consumers. Huawei was the number three smartphone manufacturer globally in Q3 2013 according to reports published by IDC, Strategy Analytics and Canalys. In 2014, Huawei will launch a series of innovative LTE devices and further build its brand among consumers through a joint passion for football and its “Make it Possible” commitment to create unlimited possibilities for people everywhere.