The Ultimate Power of Mobile AI

While delivering the keynote at IFA 2018 titled “The Ultimate Power of Mobile AI”, Richard Yu, CEO, Huawei Consumer Business Group introduced the revolutionary technology to the world. He said:

“Last year, we showed the world the potential of On-Device AI with the Kirin 970, and this year, we’ve designed an all-round powerhouse that not only features outstanding AI capabilities, but also brings cutting-edge raw performance to consumers. Equipped with all-new CPU, GPU and Dual NPU, the Kirin 980 is the ultimate engine to power next-generation productivity and entertainment applications.”

The Kirin 980 is the world’s most powerful and intelligent SoC chipset. The cutting edge TSMC 7nm process technology enables Kirin 980 to pack 6.9 billion transistors within a 1cm2 die size, up 1.6 times offrom the previous generation. Compared to the 10nm process, the 7nm process delivers 20 percent improved SoC performance and 40 percent improved SoC power efficiency. It combines best-in-class performance, efficiency, connectivity features, and Dual NPU AI processing power that will bring about the next evolution of mobile AI. As graphics in mobile games have become more and more sophisticated in recent years, Huawei has integrated the Mali-G76 GPU into the Kirin 980 to deliver unparalleled gaming experiences with its optimization technology and guaranteed battery life. 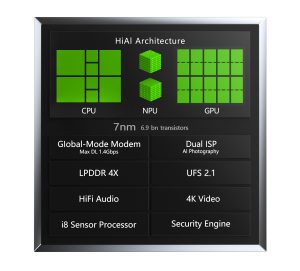 At the IFA 2018, HUAWEI AI Cube, a two-in-one speaker and 4G router with Alexa built-in, marked the company’s official entry into the nascent smart speaker market. It represents a new, more natural and convenient way for consumers to connect to the internet and control smart devices, while delivering high quality audio in a compact form factor featuring a minimalist design. With support for Wi-Fi on 4G LTE, HUAWEI AI Cube can fulfill the myriad connectivity demands arising from the smart home. Setup for the router is easy and intuitive—it only requires a 4G SIM card plugged in to establish a high speed internet connection at LTE Category 6 speeds (300Mbps downlink). HUAWEI AI Cube is also compatible with the 802.11ac Wi-Fi standard, meaning the router is dual band, capable of working on the 2.4GHz and 5GHz channels and transmitting data over LAN at up to 1,200Mbps.

“HUAWEI AI Cube boasts a complete set of functionalities that showcase Huawei’s commitment to innovation and collaboration. By combining HUAWEI telecommunications technology with Amazon Alexa, the HUAWEI AI Cube is a compelling product that will surely strike a chord with consumers.”

Huawei also announced the launch of two new gradient variants for the HUAWEI P20 Series: Morpho Aurora and Pearl White, expanding its range of gradient colors to four. When creating these two unique hues, Huawei once again turned to nature for inspiration. The Morpho Aurora was inspired by the Morpho butterfly, while the Pearl White exudes the same elegance as the iridescent mother-of-pearl.

In H1, 2018, Huawei shipped 95+ million units globally; fusing art and technology, the P20 Series specifically has been very well received among the fashion-forward consumers. The global shipments of the P20 Series surpassed 10 million (does not account HUAWEI P20 lite); of which, nearly half of the users are women. According to a report from IDC, Huawei’s Q2 2018 global smartphone market share has increased to 15.8%, ranking 2nd in the world for the first time.

Huawei Consumer Business Group (CBG) is one of Huawei’s three business groups, providing a range of products including mobile phones, wearables, tablets and laptops. Huawei’s products and services are available in more than 170 countries, and are used by a third of the world’s population, ranking second in the world in mobile phone shipments at the end of May 2018.

As a leading technology company, Huawei invests a significant amount of its annual sales revenue to research and development efforts, and has established 15 research centers around the world. Among these facilities is the Huawei Aesthetics Research Center in Paris. Huawei’s newest R&D center is the Max Berek Innovation Lab in Wetzler, Germany, where Huawei and Leica are jointly researching technologies to improve mobile device camera and image quality.