As we all know that MWC 2017 has already commenced and different companies have revealed their interesting new gadgets. Similarly, Motorola also showcased different smartphones. The company has already introduced many phones such as Moto Z, Moto Z Play and Moto M and so on. Motorola Enhances ‘Mobile Photography’ with its Moto Modes & Hasselblad True Zoom.

At this MWC Motorola also showcased its Detachable Camera once again. As PhoneWorld team is there at the MWC 2017 so we keep on updating our viewers about the happenings.

The Hasselblad True Zoom Moto Mod transforms the phone into a professional camera. The True Zoom adds a separate sensor and optics to the Moto Z. It has the same footprint as the Moto Z it’s attached to. Because of this it fits perfectly onto the back of the Moto Z. The True Zoom feature is compatible with the Moto Z family. 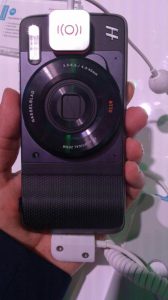 Moto Z: All You Need to Know

Let’s have a look at the specifications of Moto Z and Moto Z Play:

After the split of Motorola into two companies, with Motorola Solutions catering to the enterprise segment. Acquired soon after by Google, Motorola Mobility was sold to Lenovo in 2014. Since then we have seen quite improvement in their devices.