Mr. White, a well-known leaker, has revealed the latest Apple Pencil in an image, posted on Twitter. It may be released alongside the new iPad Pro. According to the leaked picture, the third-generation Apple Pencil will return to the glossy look, while the Pencil 2 has a matte coating. The new Apple Pencil would be similar to the existing one, which is shorter than the iPad and magnetically sticks to the side of an iPad and gets charged as well in this position.

‘New Apple Pencil’ Revealed, May Release alongside the iPad Pro 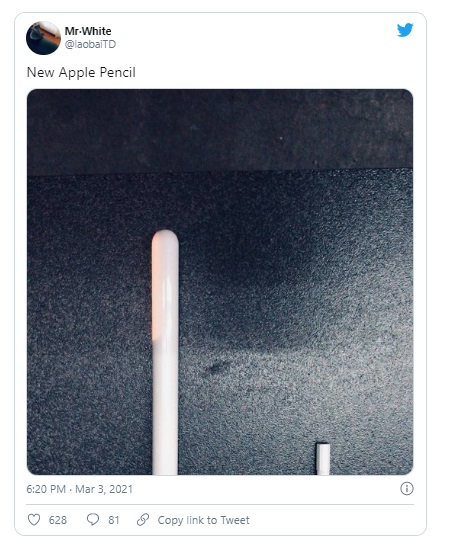 The image also indicates that the apple pencil tip is replaceable. Unlike the last edition, which has thin and has screw-on tips that were designed to be quickly replaced, the current one appears to have a big nib element, according to Rumors. The design change may bring internal feature upgrades.

The exchangeable pencil tips may bring new features such as air-gestures, and the pencil may also include paint, ink, or graphite use for tip module.

In 2015, Apple introduced the first Apple Pencil, which transforms the way iPads are used for painting, designing, and general use. Previously, the leaker had indicated that the next Pencil will be available in black color.

As expected, Apple will be releasing the latest iPad Pro this month. A new 5nm chip known as the A14X Bionic is probably going to power in iPad Pro 2021. A new mini LED display technology and improved camera features are also included in Apple’s upcoming devices.