Google keeps on introducing new features and improvements to all its Apps. The company always tries to engage its users. A few days back, Google introduced live album feature for Google photos users. Then, it has introduced a time-saving trick for its Google Docs App. After that, Google brought some changes to its Maps App. Now, we have come to know that the company is planning to replace the older version of Contacts App with all-new Google Contacts Web App.

The company said that the new Contacts web app will become available to all G Suite users on November 28. The older version will go away entirely on February 12, 2019.  However, on January 15, 2019, the latest version of the app will become the default. Here’s the look of the redesigned version. 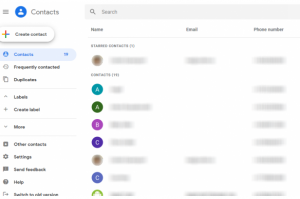 The redesigned version has been available for the Gmail Accounts for some time now. So, it will not be a big change for those who are already using it. In addition to that, the users still have an option to use the older version as well. However, after a few months, this option will be no longer available. Let’s wait and watch what will Google offer with this newly redesigned version in February 2019.