The low-cost brand Xiaomi has officially announced the two huge specs of Mi Mix 3. The device will come with 5G Support & 10GB of RAM. Xiaomi has announced it officially on its official Spanish Facebook page that the Mi Mix 3 will be one of the “first smartphones in the world” to be compatible with the next-generation 5G networks.

The yesterday’s teaser has already given the mysterious message of these two huge features but today’s announcement has proved that Xiaomi Mi Mix 3 will come with 5G Support & 10GB of RAM. That is no doubt, impressive.

You can see in the following posters: 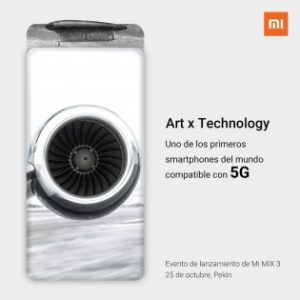 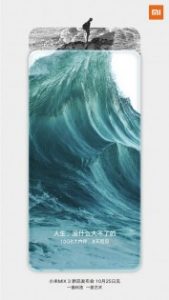 The Xiaomi Mi Mix 3 will be internationally launched on Thursday, October 25 in Beijing. The device will be available in Black, Green Emerald, and Sapphire Blue.
Other than these two huge features, Xiaomi Mi Mix 3 appears to be a beast. The handset will come with a 6.4-inch FHD+ AMOLED bezel-less display, Qualcomm’s flagship processor, and in-display fingerprint scanner.
The Mi Mix 3 is also expected to come with up to 18W fast charging support, but there are no words about the battery. According to some leaks that device might come with the retractable camera module. The handset is likely to have a dual-camera setup, consisting of a 16MP primary sensor and a 13MP secondary sensor. The font shooter might sport a 20MP sensor for taking selfies.
Zainab SaeedLast Updated: Oct 18, 2018
Share
Facebook Twitter Pinterest