OPPO is now ready to launch a new smartphone on October 10th while according to the rumours that it is also going to launch a new series on a similar day. Oppo is expected to launch all-new K-series of smartphones and it seems that the OPPO K1 will be one of the devices in series. However, recently the OPPO K1 has spotted in a real-life image. 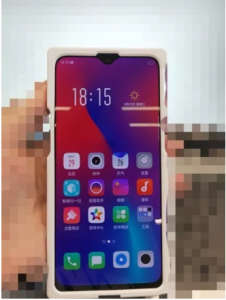 The handset is encased in an industrial case in the image just to protect the identity, but it is believed to be the upcoming K1. Just like OPPO R17 the photo, the smartphone will have the same waterdrop notch display.

OPPO K1 with a Waterdrop Notch Spotted in Live Image

The Geekbench listings reveal that phone will be running on Android 8.1 Oreo-based ColorOS software out of the box. When looking into the device as performance wise, the OPPO K1 managed to score 1436 points in the single-core test and 5467 points in the multi-core test. However, the single-core test is below the average score expected from a Snapdragon 660-powered smartphone but the multi-core score is quite impressive.
OPPO K will feature an in-display fingerprint sensor. PCBCM30 is also called as OPPO PCBCM30. It is going to feature a 6.4-inch AMOLED display with 1080 x 2340 Full HD+ resolution and a 19.5:9 aspect ratio. Moreover, the internal storage will be 4GB of RAM and 64GB. The more expensive variant will offer 6GB of RAM and 128GB of internal storage.
OPPO K1 will feature a 16MP + 2MP dual-camera setup at the rear and a 25MP selfie snapper on the front. The powerhouse smartphone will be packed with a 3500mAh capacity battery.