Back in August, OPPO has introduced Reno 2-series smartphones. At the launch of those smartphones, OPPO VP Brian Shen revealed that the company is working on another smartphone called Reno Ace. Not only this, but he also announced that OPPO Reno Ace will launch on October 10. However now, OPPO Reno Ace Design and key Specs Revealed through official posters.

OPPO has shared a poster on Weibo which reveal the design of the phone. The poster revealed that Reno Ace will sport a notched display having a refresh rate of 90Hz. Moreover, the smartphone will also feature a quad-camera setup on the back. The main camera of 48MP. 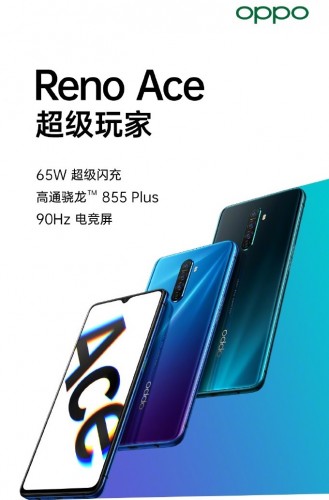 There is not any fingerprint reader on the back which means it will have an under-display fingerprint scanner. Moreover, the phone will be available in two colours. It will also have a USB-C port at the bottom with a 3.5mm headphone jack. The previous reports revealed that the phone will feature a Snapdragon 855+ SoC and 65W fast charging.

Since there is some time left in the official launch. We may also get some more information about the phone very soon. So, stay tuned for more updates.