AnTuTu is one of the most popular benchmarks used for testing smartphones and tablets and it has just released the top 10 rankings for Central Processing Unit (CPUs) and Graphics Processing Unit (GPUs). Acording to the report both the lists have been topped by the Qualcomm Snapdragon 820.

The Qualcomm Snapdragon 820 processor won the first place by scoring 136,383, which is nearly 4000 points higher than that of Apple A9. The company clearly looks like the flagship smartphone chip leader as the list features five Snapdragon chip variants in total with 2015’s Snapdragon 810 still ruling among the top five.

The Qualcomm Snapdragon 820 is being used in many flagship devices this year including the Samsung Galaxy S7, S7 Edge, the LG G5 and the Xiaomi Mi5. 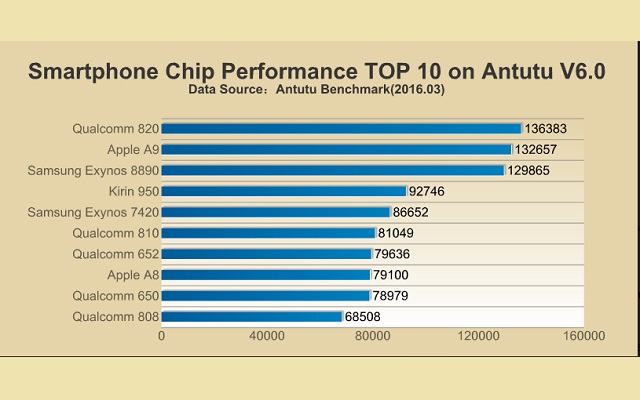 According to the AnTuTu, the top three performers on the GPU list are exactly the same and in exactly the same order as the CPU list, with the Snapdragon 820 (Adreno 530 GPU) at the top, the Apple A9 (PowerVR GT7600) in second place and Samsung’s Exynos 8890 (Mali-T880 MP12) at third position. The Qualcomm 810 moves from 6th position to 4th position as the Kirin 950, which is used in phones like the Huawei Mate 8 drops to 8th place on the GPU list. 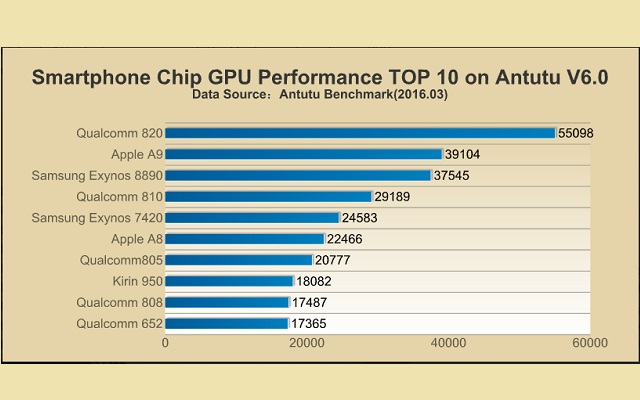 AnTuTU says that both lists use average scores computed from the results of multiple tests. Overall, the Snapdragon 820 SoC finished on top of both lists. It would appear that Qualcomm has its groove back after a year that they would rather forget about.