Over the last month, it has blown up by almost 1,400 percent, and still there is no signs of slowing. Digital currency Ripple has blown past its cryptocurrency rivals because it is working with large institutions, which give it an aura of legitimacy.

Ripple: The Second Most Valuable Digital Currency after Bitcoin

Ripple is officially the name of a five-year-old start-up based in San Francisco that is developing a payments network for financial institutions. However, XRP is the name of the coin participants can use for transactions. In October the company has announced that more than 100 financial institutions are using its network in some way.  The firm creates the currency and releases it periodically. XRP consistently handles 1,500 transactions per second, 24×7. 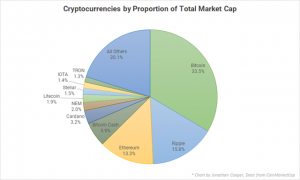 There is an increase of almost 8000% since the start of 2017. Well, Ripple uses the same blockchain technology as Bitcoin. However it is not mined by users.

Thursday that 3 of the top 5 global money transfer companies plan to use XRP in payment flows in 2018.

Ripple technology is being used by more than 100 banks. Recent trading pushed Ripple’s value up to $3.5. A year earlier the value of Ripple was just $0.007.