A new Samsung device is already in many leaks and renders catching the people’s attention. No doubt, Samsung’s M-series is quite popular because of its eye-catching specs, especially among youth. Now, Samsung Galaxy M02 is the new phone to hit the market very soon. The device has already appeared in many certification sites. Now, it has appeared on Geekbench hinting its imminent launch.

The phone has appeared with model number SM-M025F. The listing has revealed that the phone will run Android 10 out of the box. Moreover, it will have 3GB RAM and obviously a Qualcomm chipset.

Samsung Galaxy M02 Shines On Geekbench- Launch is Near 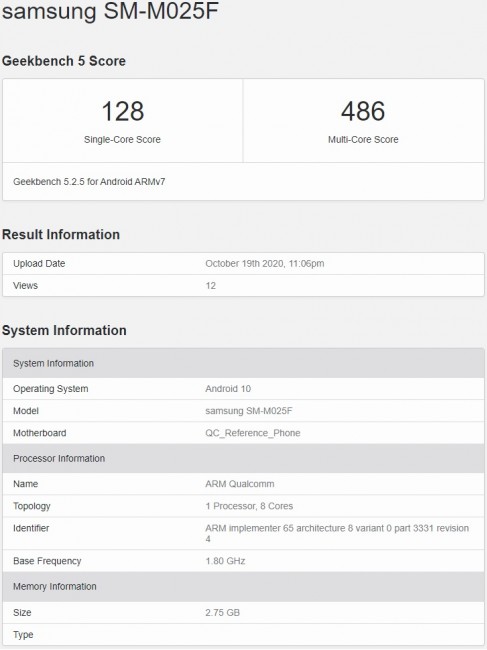 Previously, two phones with the model numbers SM-M025F and SM-A025F has appeared on Bluetooth SIG’s website. Both phones were listed in the same document. It means, they will be the same phone launching under different names in different markets.

Furthermore, the phone with model number SM-A025F has also appeared on Geekbench last month with Android 10, 2GB RAM, and a Qualcomm chipset. So, we can say that the phone will be available in two RAM variants.

Furthermore, the rumours claim that the phone will launch with Snapdragon 450 SoC.

Also, it will have a 5.7″ HD+ display with a 3,500 mAh battery. It will come with an 8MP selfie camera and dual camera setup on the back consisting of a 13MP primary and 2MP depth sensor units.

There is no word when the phone will launch. But we can say that it will soon hit the market.