The Minister of Industries and Production Muhammad Hammad Azhar said the smartphones manufacture in the country is constantly increasing due to implementation by Pakistan Telecommunication Authority (PTA) Device Identification, Registering, and Blocking System (DIRBS). The statement has been made during the Minister’s meeting with Samsung MD and CEO Pakistan. The minister stated Samsung officials appreciated DIRBS Implementation and now plans to set up a smartphones manufacturing plant in Pakistan.

The Minister of Industries and Production Muhammad Hammad Azhar appreciated his team in the ministry and also the support of the Ministry of Commerce, IT & Telecom Ministry, the Pakistan Telecommunication Authority of Pakistan, Ministry of Planning, the Federal Monitoring Board (FBR) and consideration of the ECC. 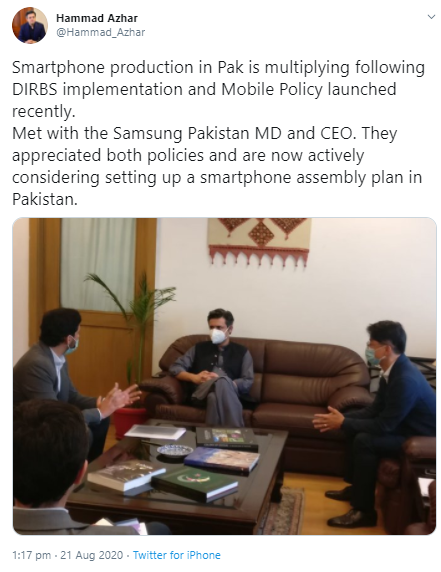 In order to comply with a summary by the Ministry of Industries and Production, the Federal Cabinet approved the first-ever Mobile Device Manufacturing Policy in June 2020. The Technology Development Board (EDB), a techno-economic arm of the Ministry of Industries and Production (MoI&P), drew up the proposal in consultation with the relevant public and private sector stakes.

The objective of that policy is to promote the establishment of a new mobile production industry in Pakistan policy by supporting the local sector by growing the gap between CBU and CKD. In the country in which 16 local companies manufacture 2G featured mobile devices. The companies are heading to manufacturing smartphones now because technology is shifting to 4G/5G. Satisfaction has been expressed by local producers with the approval of the mobile phone policy and they expect investments in the sector to begin.

The market has a potential of more than 40 million mobiles, which has become a great opportunity, after the successful launch of Device Identification, Registration, and Blocking System (DIRBS), which eliminated the smuggling of mobile phones. Imported handsets are exempt from 4% local sales withholding tax. Cabinet’s approved policy decided that local handsets should be provided with the same exemptions. Pakistan’s environment is Ideal for investing in mobile phone production.

The policy is meant to enable local assemblers to provide jobs to local engineers, qualified and semi-skilled young people. In Pakistan, productive human capital value is able to be used to draw investment in the sector from around the world. The strategy is planned to slowly localization/indigenization parts of the mobile phone.

The salient features of the policy are as follows:(i) removal of Regulatory Duty for CKD/SKD manufacturing by PTA approved manufactures under Input/Output Co-Efficient Organization (IOCO) approved import authorization;(ii) removal of Fixed Income Tax on CKD/SKD manufacturing of mobile devices up to $ 350 category;(iii) increase in Fixed Income Tax on $ 351 -500 USD category by Rs 2000 and $ 500 by Rs 6300 on CKD/SKD manufacturing only;(iv) removal of Fixed Sales Tax on CKD/SKD manufacturing of mobile devices;(v) PTA shall allow activation of handsets manufactured in the country under import authorization of inputs by IOCO in CKD/SKD kit (8517.1211) and not under HS Code 8517.7000, ie, parts. With this step erroneous information, in the part category will be eliminated at the import stage. After paying all taxes and duties as decided by the government, CBUs are allowed imported by notified routes from time to time till further amendment. (vi) in up to $ 30 category, words “except smartphones” to be inserted for CBU imports under 8517.1219 to avoid misdeclaration; (vii) R&D allowance of 3 percent to be given to local manufacturers for exports of mobile phones;(viii) Locally assembled/manufactured phones to be exempted from 4 percent of withholding tax on domestic sales; (ix) Government to commit maintaining tariff differential between CBU and CKD/SKD till the expiry of the policy; (x) local industry to ensure localization of parts and components as per roadmap included in the draft policy and; (xi) EDB to act as Secretariat of Mobile Phone Manufacturing Policy and ensure the development of allied parts, components, and devices.

You may be interested in: PTA To Implement Device Identification Registration & Blocking System (DIRBS) On Dec 1