We all know that Spotify is a digital music service that provides you access to millions of songs. Almost a month back, the streaming music service reached 100 Million premium subscribers worldwide. It keeps on introducing new features in order to remain in the limelight. A few days back, Spotify introduced  Sleep Timer Option for the Android User. Now, we have come to know that a new Spotify Feature is under testing.

A developer with the Twitter handle, @wongmjane tweeted about this pretty cool Spotify feature. This feature will allow you to listen to your favorite songs with your friends at the same time. 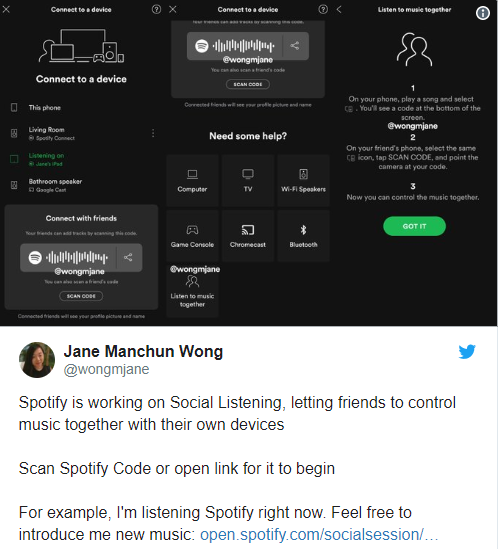 In addition to that, everyone in the part can contribute to the playlist by adding tracks of their own. It can easily be done by just scanning the Spotify Code or opening the link to the social playlist. Moreover, the “Now Playing UI” will show the number of people connected to the playlist. All the people connected to a particular playlist can add their favorite tracks as well. This feature is still under testing. It is expected that the new Spotify feature will make its way to the wider public very soon.

Moreover, Spotify had also Launched Standalone App For Apple Watch. After a short testing period, Spotify’s new app for Apple Watch started to offer users the ability to seamlessly access and control music and podcasts on the go.