For all those who were anxiously waiting for Xiaomi to unveil Xiaomi Mi Pad 4, it will be made official next week. It means we can expect to see the device around June 25. This confirmed news comes on company’s Weibo account.

Xiaomi Mi Pad 4 set to be made official next week

The tablet market has not enjoyed a successful run, mainly due to the proliferation of phablet-sized phones but the Mi Pad is one product that was well received, especially last year’s Mi Pad 3. The Mi Pad 4 is expected to retain the 7.9-inch LCD display found on its predecessors. A leaked firmware file, however, suggest the tablet may come with an 18:9 aspect ratio but that isn’t certain. 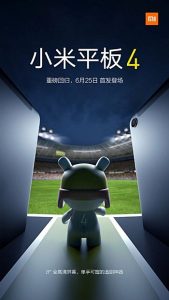 The device is expected to feature a 13-megapixel rear-mounted camera and a frontal shooter of 5-megapixel. There is also the rumour of a Snapdragon 660 chipset onboard. We won’t have to wait for too long to get the full details of this product but we expect something with some upgrade over the Mi Pad 3.

Previously Mi Pad 3 had a 7.9 inch display with a resolution of 2,048 x 1,536 pixels. The tablet comes with MediaTek MT8176 chipset along with 4 GB of RAM. To store other apps or data, the tablet has 64 GB of ROM. But unfortunately, this device does not support any microSD card. The tablet comes with a metal body which is available in a Champagne Gold color option.

Lets see what changes will be made in Xiaomi Mi Pad 4.