According to World Economic Forum (WEF), there will be over 20 Billion Connected Things globally by 2020. WEF has revealed a list of countries which are the biggest early-adopters of the Internet of Things. Moreover, South Korea has win the race as it has maximum number of connected devices.

According to data from the Organization for Economic Cooperation and Development (OECD) and search engine Shodan Koreans, Danish, and Swiss have more connected devices. There are top 10 countries at adopting the Internet of Things (IoT) with their achievements. 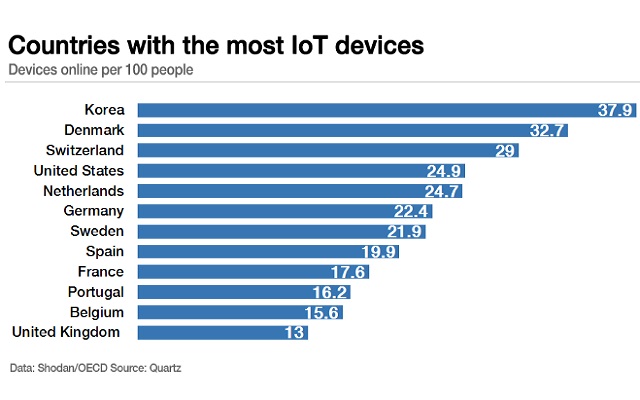 South Korea has launched a dedicated IoT wireless network in 2016

Internet of thing is nothing new. It has the ability to transfer data over a network without requiring human-to-human or human-to-computer interaction. Moreover, IoT has evolved from the convergence of wireless technologies, micro-electromechanical systems, microservices and the internet.

According to Global Information Technology Report 2016 (GITR), Pakistan is the World’s Most Affordable Country in ICT and Telecom Sector. However, GITR is the annual report published by World Economic Forum (WEF). According to that report, Pakistan’s technology and telecom market has the lowest price points as compared to other markets across the world.

See Also: Pakistan is the World’s Most Affordable Country in ICT and Telecom Sector: WEF