Twitter claims that the changes in follower counts that happened after the company announced its agreement to be purchased by Elon Musk were natural. Following the announcement, several high-profile cases witnessed an increase or decline in followers. These changes, Twitter verified to TechCrunch, were caused by fresh account setup and deactivation, not by bots or by any action on the social media giant’s side.

In a comment, Twitter said, “We’ve been investigating recent swings in follower counts.” “While we keep taking action on accounts that break our spam rules which can affect follower numbers, these changes appear to mostly have been a result of increased new account creation and termination. We’ll keep an eye on these variations in follower counts.”

According to sources, former US President Barack Obama, who has the most followers on Twitter, ended up losing more than 300,000 followers once the news broke. Katy Perry’s Twitter account has lost almost 200,000 followers. In a tweet shortly after the transaction was announced, “Star Wars” actor Mark Hamil reported a significant decline in followers. 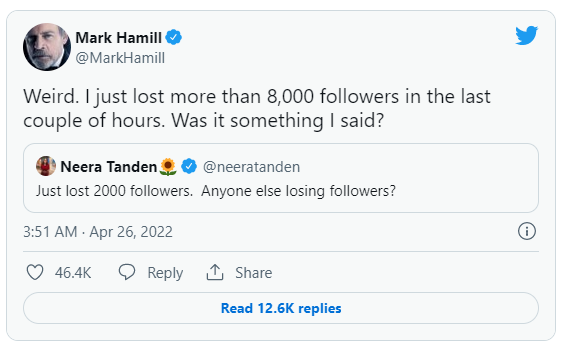 Why Are Some People Against The Deal?

Many Twitter users warned they would quit the platform if Twitter accepted Musk’s offer before it was disclosed. “#RIPTwitter” was trending worldwide shortly after the news broke. And rival social networking networks, such as CounterSocial, were also dominating as users looked for new options. Given the variation in follower counts, it appears that some individuals kept their vow to delete their accounts in response to the news.

Some users are concerned that Musk’s strategy to free speech will cause changes in the Twitter’s content moderation rules and the reactivation of banned users, with some guessing that former President Donald Trump could be allowed to return, despite his statements that he doesn’t intend to if his account is reinstated.

Right-wing politicians on Twitter, on the other hand, have witnessed a rise in followers. According to NBC News, Rep. Marjorie Taylor Greene had 539,000 followers one day before the arrangement was disclosed, and now has over 660,000 as of Wednesday morning. Rep. Matt Gaetz, a Republican from Florida, observed the shifts and acknowledged them in a tweet.

Even though Twitter has stated that the changes in follower counts appear to be natural, the social media giant will continue to investigate.

On Monday, Twitter said that it has accepted Musk’s bid to buy the publicly traded firm for $54.20 per share, valuing it at $44 billion. Musk reiterated his mantra that “free speech” is critical to Twitter’s survival in a news release accompanying the move.