Facebook Friend list feeds allow users to scroll through the posts from one of their designated friend lists, for example, family, work colleagues, neighbors, industry peers and so on. It results in a more personalized version of Facebook as it can help you to catch up with the updates that are important to you. Recently, we came to know that Facebook is going to shut down the Friend List Feed in order to improve the main news feed.

Facebook has informed a few users by sending them messages that Friend lists feed will be going away from Facebook soon and Facebook is doing this to improve the main newsfeed experience of users. After knowing about it, some of the users are totally unbothered while few are relieved because the feature was kind of useless.

The users can still create, edit and share to their friends’ lists as Facebook is keeping the lists of the users. However, they won’t be able to view the custom feed from the list of friends which means you can not see posts from only those people you added to the lists. According to the Facebook, this newsfeed was going to wind down on August 9. Some of the users had already seen the change. Facebook also revealed that this feature might be still available for those who have an older version of the app right now. So, it may be present in the older version of Facebook users. 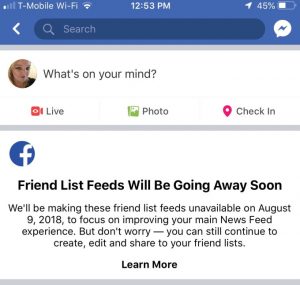 However, the company has confirmed its shutdown by stating that:

“We’re shutting down this lesser-used feature to focus our efforts on improving the main News Feed experience. While people won’t be able to view custom feeds from lists of friends, they’ll still be able to create and edit friends lists, and share just to these audiences whenever they post to Facebook. In addition to these options, they can also keep customizing News Feed by visiting News Feed preferences to choose which posts they want to see first, or hide posts they don’t want to see.”

After a long time of 9 years, Facebook decided to get rid of the lists. Let’s see will it be beneficial for improving the main news feed or not.