We all know that Facebook has been facing a lot of issues for a few months. Furthermore, it came into the limelight for privacy concerns and spreading fake news. We all know that the platform has been used extensively by people and agencies to spread the fake news in the past few months. After all this, the social network is trying hard to solve the fake news issue. After introducing the fact-checking tools for posted articles, Facebook is taking preventative measures against fake news to a new level. Facebook’s Photo & Video Verification Feature will help to combat fake news.

In order to combat fake news and content, the social media giant, Facebook is introducing tools that will verify photos and videos. If the tools will fail to verify the authenticity of the content then they will further prevent it from spreading.

The feature was previously tested in France. Now, it is useful enough for broader roll out. It simply cross checks images, audio or videos with other news sources and articles on the web to verify their authenticity.

For this purpose, Facebook has partnered with 27 third-party networks. They will make sure that the “verified” label comes from a reputable news source with more partners joining in the future. The network will make use of Machine learning to identify fake content. Moreover, the Fact checkers will check for authentication using techniques such as reverse image search and image metadata analysis. Content which potentially contains harmful material will be then tagged with a disclaimer. Let’s have a look at its working procedure. 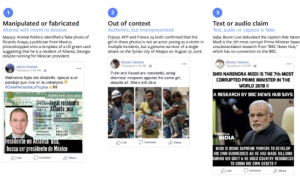