Xiaomi is all set to launch the most-awaited gaming handset, Black Shark 2 on March 18. The good part of the news is that the crazy game lovers will not have to wait too long to get their hands on this amazing gaming handset. The highly anticipated smartphone, Black Shark 2 appeared in Hands-on Photo earlier. After that, the handset got spotted at AnTuTu. Recently, we have come to know that the upcoming gaming phone will come with E-Sports Battery having 60% Improved Performance. Isn’t it amazing??

Black Shark 2 Will Come With An Optimized Battery System

According to the latest reports, the handset will come with an e-sports graded battery. The Black Shark CEO Peter revealed on Weibo that the upcoming gaming phone will come with an e-sports battery having 60% improved performance. This means that the battery will increase the charging and discharging performance by 60 percent. This will be all due to the optimized battery chemical system and tweaking the charge and discharge algorithm. 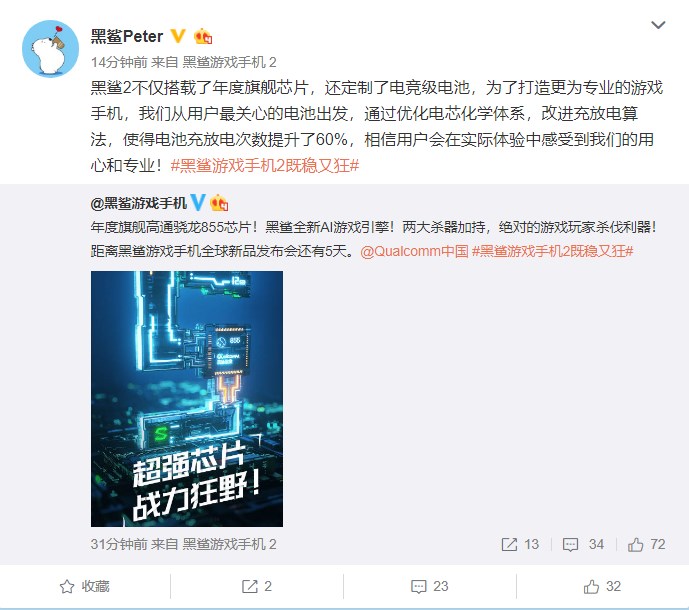 According to some of the previous reports, the handset will come with an improved cooling system called Liquid Cooling 3.0. However, it has now been confirmed by the CEO also. Moreover, the handset will sport improved dual rear cameras. We expect some of the same features from its predecessors as well. The customizable LEDs on the back and support for attachable gaming peripherals are also expected to make a comeback. The previous listing revealed that the upcoming gaming phone will come with the powerful Snapdragon 855. The amazing part is that the Snapdragon 855 is the first 5G-supporting chipset. Furthermore, the phone will boast 12 GB of RAM. In addition to that, it will run Android Pie straight out of the box.

The upcoming gaming handset will go official on March 18. Let’s see what Xiaomi offers in its new gaming phone. If you are a crazy game lover, then brace yourselves for this upcoming smartphone.