In the second quarter of 2021, the global smartphone market shipped 329 million devices, resulting in 19 percent jump in year over year but down 7% QoQ. According to CounterPointResearch.com,  Samsung, Xiaomi, Apple, OPPO, and Vivo were the top five smartphone makers for the quarter.

According to the latest analysis from Counterpoint’s Market Monitor service, global smartphone sales fell by 7% QoQ in Q2 2021. This was owing to persistent component shortages as well as the implementation or expansion of COVID-19 limitations throughout Asia and Europe. Shipments, on the other hand, increased by 19 percent year over year as inoculation rates climbed in several key economies, reducing the need for lockdowns as stringent as those seen in the same quarter of last year. 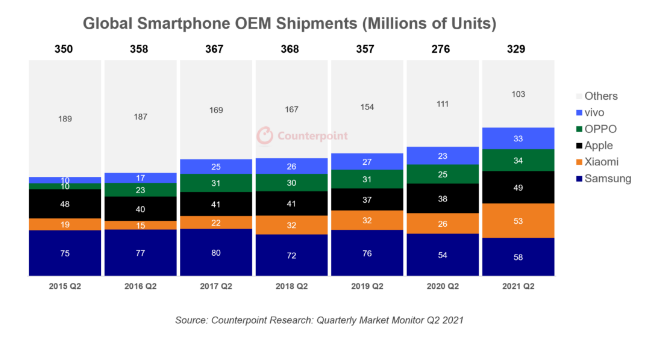 Samsung maintained its dominance by shipping 58 million devices in Q2 2021, up 7% year over year, but its market share fell to 18% in the period. Samsung has a 19 percent market share in the worldwide smartphone industry, according to the latest figures from market research firm Canalys. It grew by 15% year over year, indicating that the company’s total smartphone business performed better than the previous year.

Xiaomi came in second, with a remarkable 98 percent year-over-year increase owing to high demand for the Redmi 9, Note 9, and Note 10 series smartphones. In the quarter, the firm shipped nearly 53 million devices and generated the greatest revenue in the company’s history.

Despite falling to third place, Apple had record second-quarter shipment growth owing to strong demand and supply for its iPhone 12 series.