Google has been working to bring a lot of changes to its Apps. Google is gradually working on all its Apps to make them more user-friendly and simpler to use. Recently, Google Drive For Android got a manual backup option. The Google Drive Manual Backup Option will allow Android Users to initiate a Drive Backup manually.

We all know that Google Drive can keep the phone’s data like text messages, app data, contacts, and call history. The sad part was that there was no option to manually back up your data. The only option was the Automatic backup which worked when the phone was plugged into the charger and connected to Wi-Fi. However, if these conditions were never met, there was no chance of your data being backed up. Now, Google has sorted this problem out for you. The Manual backup option can now allow you to initiate it manually. 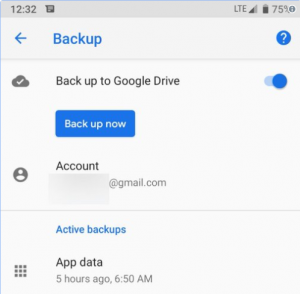 According to the latest reports, the manual backup option is currently rolling out to more devices via Google Play Services. It means that your phone doesn’t require an OTA in order to get this feature.