Signing in to Gmail, Youtube will no longer be supported for Android phones running version 2.3.7 or below from Google after September. Google informs users through email that the change will take effect on September 27, 2021. Users are encouraged to upgrade to Android 3.0 version or higher in order to continue accessing Google applications after September. However, users should still be able to log in to their Google accounts using the phone’s browser.

An image of the email sent to those who are likely to be affected by this change was published by 9to5Google. Since very few Android users still use extremely old versions, Google is taking this step to preserve user data and ensure account security. The “username or password problem” message will appear on Android devices running version 2.3.7 and below after September 27.

These emails sent to be as a warning to the few users who are still using the outdated software versions, encouraging them to either upgrade their software or switch to another updated device. 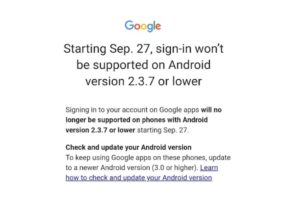 On or after September 27, Google products and services, such as Gmail, YouTube, and Maps, would not work properly for users with outdated Android versions, according to the report. Also, if they try to add or create a new Google Account, or if they try a factory reset and try to sign in again, they will receive the same error message. Also, an error message will appear for users of older versions of Android if they try to change their Google Account password, which signs them out on all of their devices. Even if you remove the account from the device and try to re-add it, you’ll continue to get the username and password problem.

Android version 2.3.7 and below software users will have no solution left, and it is better to obtain alternative methods to continue using Google apps and services without interruption.

You may be also interested in: Have a look at HONOR Magic 3 series exquisite features