Nokia 7.1 Plus ( also known as Nokia X7) has surfaced now in some renders. These CAD-based renders show that the handset has a glass back and a dual rear camera setup. This upcoming smartphone will have rear-facing fingerprint sensor.

Render of Nokia 7.1 Plus showed its display notch and in another render image showing the back panel of the Nokia 7.1 Plus. The device will have an anodised aluminium back panel as well as Android One branding. 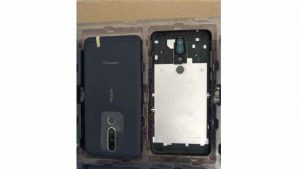 The new Nokia smartphone will give it’s first appearance at an event by HMD Global that is taking place in central London on October 4. It is also to be expected that Nokia 9 will be unveiled at the same event.

The CAD renders suggest that the Nokia 7.1 Plus has thin bezels and a small display notch. Moreover, there will be also a large-enough chin with Nokia branding.

The renders show the back view of the Nokia 7.1 Plus with a glass panel and a glossy finish on top. Furthermore, the smartphone to have a vertically-placed dual rear camera along with an LED flash.

According to the rumors, the Nokia 7.1 Plus will be the first device by HMD Global to ship with the Snapdragon 710 on the inside. This device will have a 128GB of internal storage and 6GB of RAM with Android 9 Pie.