As we all know, Carl Pei’s Nothing launched its first ever smartphone this month and it sparked curiosity in smartphone lovers around the world. The reason for this popularity is the unique name and features that Phone 1 has arrived with. One such feature is the new operating system of the Phone 1, which is called the Nothing OS. So, today, we are going to dive deeper into the OS of the Phone 1 and see what it has to offer and what is different from other operating systems or Android skins.

What’s new in Nothing OS?

It is pertinent to mention here the Nothing OS is based on Android 12 like other Android skins (MIUI, Realme UI, etc.). The operating system is something of a flashpoint for Nothing, as it aims to make a statement against the overcomplex nature of many contemporary Android skins. So simplicity is the primary difference between the Nothing operating system and the other ones. Its approach is based on a few broad principles which are entailed below:

Furthermore, apart from two exceptions, every pre-installed application, including the Phone app and file manager, is a Google app. The two exceptions are the Camera app and the Recorder app. The latter features a retro, tape-like look, but lacks the voice transcription intelligence of its Google Pixel counterpart. However, it can concentrate on voices to blot out surrounding noise.

Now we would be moving towards the top features of the Nothing operating system.

Top Features of the Nothing OS:

The general user interface has few distinctive features. Instead of the usual four quick settings, there are six quick settings in the notification tray. Swiping down again shows two bigger circles with networking and device connection controls on the left and right, respectively. For even more refined settings, these can be swiped horizontally. For instance, you can flip between the toggles for mobile data, Wi-Fi, and hotspots by swiping across the left circle (and long press them to go straight to the corresponding Settings menu).

The “Glyph” lighting bands behind the transparent glass panel on the back of the Nothing Phone (1) are its most remarkable and appealing feature. The lighting can be partially customized, but you must utilize pre-set patterns for particular apps or contacts.

The light bar above the USB-C charge port will fill to reflect the current charge level when using a wired charging cable.

When the user says “OK Google,” the light bar above the USB-C charging connector will animate and light up to show that the Google Assistant is responding.

When your device is placed face down on a surface, a  Nothing OS feature “Flip to Shhh” will activate, setting your device to Do Not Disturb, disabling vibrations and sounds, and enabling lights-only notifications.

Since the release of the Ear (1) earbuds, a number of widgets based on Nothing’s Dot Matrix aesthetic have been seen in the Nothing Launcher Beta prior to launch. These widgets are as follows:

A traditional Swiss-style clock that displays time along with the current date.

A huge digital weather icon is displayed alongside the temperature and weather conditions in text form.

Almost identical to the “At a Glance” widget seen on Google Pixel devices, this widget displays the current weather conditions and temperature with an icon and text, as well as the current date and day. This is removable from the home screen but remains on the Nothing OS lock screen.

Even after switching to Android 12, not all Android skins support Google’s Material You and Dynamic Color updates straight away. Nothing OS supports both of Android 12’s core components out of the box.

In addition to the “Wallpaper & style” area, the “Customization” portion of Nothing OS also allows you to select an icon pack. Therefore, you can select a single icon or different icon packs and customize it according to your own preference.

This part is identical to the one seen on Pixel smartphones. The wallpaper-based theming mechanism applies automatically based on the colors and tones of the phone’s preset background. Additionally, you can select from four predefined color options.

Unfortunately, the Nothing Launcher app grid only offers 4×5 and 5×5 layout options. We can say that this is one of the very few downsides of the Nothing operating system.

With Nothing Launcher, you can experience the Android interface combined with Nothing’s iconic design language. The distinctive features include Max Icons and Max Folders, along with bespoke Weather and Clock widget. 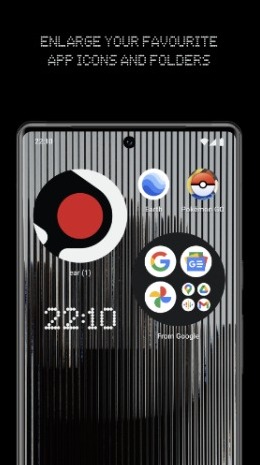 The Nothing launcher allows you to easily enlarge your favorite app icons and folders.

The Nothing Launcher allows you to enjoy unique fonts and visuals that you haven’t seen before. 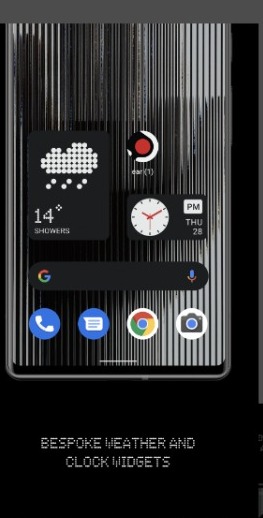 Stay updated with weather and schedules with Nothing Launcher bespoke weather and clock widgets.

Camera App of the Nothing OS:

Obviously, the Nothing Phone (1) camera requires an application, thus Nothing OS comes with a very conventional array of photography and filmmaking options. The dual camera system includes a 50-megapixel Sony IMX 766 primary sensor and a 50-megapixel Samsung JN1 ultrawide sensor.

The photo modes in the Nothing operating system include a portrait mode that enables software-based backdrop blurring. manually adjustable between f/0.95 and f/16 apertures.

The JN1 ultrawide lens of the Phone 1 is used for close-focus macro shots.

The Expert mode in the camera app includes controls for White Balance, Focus Point, Shutter Speed, ISO, and EV. In addition to that, the users can also enjoy RAW image support that is also provided for both wide and ultrawide lenses.

High dynamic range video provides an expanded colour palette for video footage. The resolutions for the HDR video are  720/1080p at 30 fps using the primary sensor.

Adjustable from 15x to 960x for long-duration video clips.

You may now configure the Glyph lighting panel’s flash mode to offer soft fill lighting in both video and photo modes. This resembles professional soft lighting with diffusion as opposed to bright light flash

When the Wi-Fi or Mobile data toggle is expanded, the Internet panel appears. You would find a new mobile hotspot toggle that enables network and data sharing instantly.

After reading the article, we are sure that now you would have a clear idea of how nothing OS is going to work and what are its top features. Without any doubt, the Nothing Phone 1 has a unique interface and operating system (android skin) and brought a slew of features for users. If you like this informative article or have any queries regarding it, do mention them in the comment section!

If you want to know more about Nothing Phone 1 along with its comparisons with different phones of the same category, then follow the link mentioned below:

Nothing Phone 1 vs iPhone 13

Nothing Phone 1 vs OnePlus Nord 2t

How much it would cost to import Nothing Phone 1 in Pakistan?