OnePlus is selling a new PAC-MAN phone , based on how skilled you are at the actual game. This latest Nord smartphone contains elements from the arcade classic PAC-MAN, in order to advertise the ongoing accessibility of the OnePlus Nord 2, and in order to preserve the brand’s legacy of unusual brand-name crossovers. This updated smartphone will be accessible before the end of 2021 and will have certain functions not present on the previous phone.

The recent special version phone from OnePlus is already official, and it is modeled on the Nord 2. This time, the Chinese company has gone the retro gaming approach, combining the OnePlus Nord 2 with the classic video game Pac-man.

Also Read: Netflix Mobile Games will be Available on iOS from Today 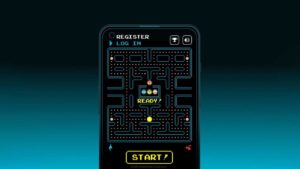 The manufacturer has validated its requirements as well as a few technical characteristics. The Nord 2 special edition smartphone will have the same specs as the previous Nord 2, but it will illuminate in the dark with infinite Pac-Man allusions.

The phone has still not been released for purchase, but OnePlus was holding a lucky draw on its website on Monday. All you had to do was go to the company site and play Pac-Man until you reached a specified high score. You would then be instantly included in the winning draw. Unfortunately, the deal has already expired, and the winners have been informed.

Even though you are not lucky enough to win the lucky draw, there is still excellent news. The special edition Nord 2 will only cost a few dollars more than the standard Nord 2. In Pakistan, the limited edition smartphone, OnePlus Nord 2 x PAC-MAN, will be sold in a single variant with 12GB RAM and 256GB storage, the phone will cost Rs.105,443/-, which is only Rs. 5,979/- more than the original model. In select areas across the world, OnePlus will also allow you to trade in your old phones.

You may be also interested in: Epic Games Opposes Apple to Pause Antitrust Trial Orders