TikTok has released its Quarterly transparency report in which it revealed that it removed 6,495,992 videos from its platform over policy violation issues in Pakistan. In the report, TikTok further highlighted that it removed a total of 61,951,327 videos throughout the globe in the first three months of the year 2021. It accounts for just `1% of the total videos uploaded on the video-making platform.

The company further clarified that on what basis videos were removed.

“Out of those, TikTok identified and removed 91.3 per cent before a user reported them, 81.8 per cent before they received any views, and 93.1 per cent within 24 hours of being posted”

Pakistan was in the second position after the USA where most of the videos were removed in this quarter. In the USA, TikTok removed 8,540,088 videos for the same issue and time period. 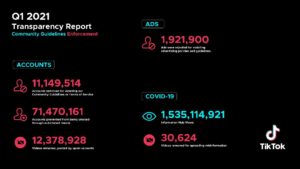 The company also highlighted its awareness work during Covid -19, when it worked with the public health sector to spread information. TikTok Covid-19 hub was viewed 1,535,114,921 times worldwide.

You May Also Like: Tiktok Videos: Nearly 10M Videos Removed by PTA

“As we provided access to information, we removed 30,624 videos in the first three months of 2021 for promoting COVID-19 misinformation. Of those videos, 79.6% were removed before they were reported to us, 88.4% were removed within 24 hours of being uploaded to TikTok, and 61.2% had zero views”

TikTok gives its creators the ability to appeal if their videos are removed for the wrong purpose and are not violating the company’s policy. However, it should be noted here that TikTok was banned for promoting immoral content in Pakistan but later on it was unbanned. Just recently the platform is again banned in Sindh for promoting obscenity in the country.

Also Read: Once Again, Tiktok Gets Ban in Pakistan