Twitter’s Redesigned Website Will have a new Whiter Look

Twitter is already testing the new look with a small number of its users who are able to opt into the new look. Officially, the redesign will not roll out to everyone for some time. Moreover, the company gave a brief preview in a tweet on Thursday. Let’s have a look at the Tweet. 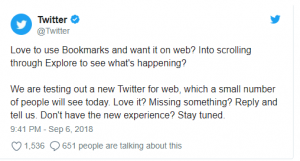 Some of the Twitter users received a pop-up on Thursday asking if they wanted to try out the “new Twitter.” After using it for just over 24 hours now, they reported about the change. According to them, the new interface is very, very, white. Twitter has also made a few nice additions as well, despite the new minimalist look. 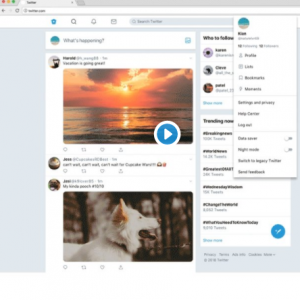 The first thing you notice about the redesigned Twitter is that it’s extremely white. Twitter’s new website features a lot of white space like flat design Facebook that rolled out last year. Furthermore, the more empty space gives a cleaner look. Even the small Twitter logo at the top of the browser tab has been given the same treatment.

Twitter has finally brought its bookmarking feature to the web with the redesign. Furthermore, it also has a much-vaunted explore tab which will replace the “Moments” section similar to mobile. The Twitter data-saver mode will prevent website previews and images from automatically loading in your timeline. Twitter is also working to improve the direct messages. You will now enjoy a full-page experience exclusively for messages. 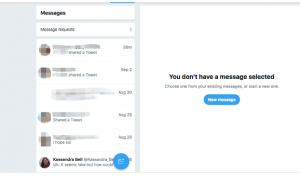 So, be ready Twitter users as the change is on the way.