We are getting near to the launch of Xiaomi Mi Mix 3. The device will come with an interesting sliding screen mechanism, according to the official teasers. Now the Xiaomi Mi Mix 3 Live Image has leaked. 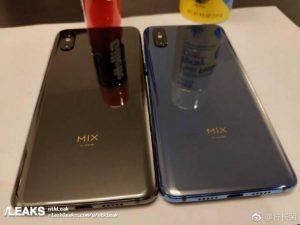 The live image surfaced on the SlashLeaks. The leaked image shows the backsides of two Mi Mix 3 units. At the very first sight, the phones look almost similar to the back of the Mi Mix 2s. There is a physical fingerprint scanner at the back, that dismiss previous rumors of an in-display digits reader for the Mi Mix 3.
In Xiaomi Mi Mix 3 Live Image, the phone seems to have a ceramic back. We can see a large “MIX” tag in gold lettering at the lower half of this upcoming device. We can see two color options in the image-black and dark blue.
In terms of specs, Mi Mix 3 is expected to come with up to 18W fast charging support, but there are no words about the battery. This new device will come with the retractable camera module. It will have a dual-camera setup, consisting of a 16MP primary sensor and a 13MP secondary sensor. The font shooter might sport a 20MP sensor for taking selfies.
The phone will officially be available on October 25.