Instagram always amazes us with the introduction of their new cool and funky features. Sometimes they throw up new story modes and face filters that become a bundle of joy for its users. Last week a new Instagram Question Answer feature was revealed. This new feature is similar to the site like Ask.fm where the users can ask anonymous questions to each other, with the answers made public. The sad part of the news is that Instagram’s Question Answer feature version is not the same as that of Ask.fm because the questions made by Instagram users aren’t anonymous. Isn’t it a shocking news??? Let’s have a discussion on it in detail.

Instagram Question Answer feature is mistakenly believed to be Anonymous

When this new Instagram feature was introduced, the users generally thought that they could ask anything in the questions whether it was good or unkind. They had a misconception that their identity would be anonymous. People even made unkind comments with recourse before discovering the fact that users could see who was asking what. Actually, Questions asked in this feature aren’t anonymous. You can see which of your followers asked it, although this isn’t made explicit.

In fact, Instagram confuses users by telling them that if their question is shared, their username won’t be displayed. It is a true fact that if the person wants to share your question publicly your username is removed. However, what is not made clear is that the recipient is still able to see your username. This has led many people to mistakenly believe that they are asking questions anonymously. 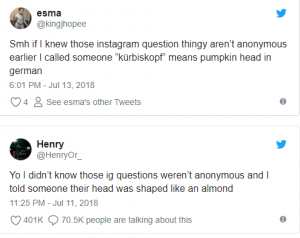 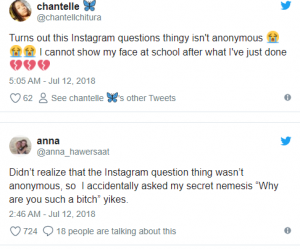 The fortunate Instagram users who have not fallen in this trap should thank God while the others who have made unkind comments mistakenly have nothing to do now except saying sorry to the ones who suffered.