We have seen the appearance of Tim Sweeney, CEO of Epic Games at the Galaxy Note 9’s launch event. The company had made the massively popular multiplayer game “Fortnite“. Sweeney announced the release of Fortnite for Android onstage as an exclusive for Samsung devices. According to the leaked rumors, it was revealed that the game is exclusive for Galaxy Note 9 but this isn’t the case. It will also be available for Galaxy S7, Galaxy S7 edge, Galaxy S8, Galaxy S8+, Galaxy S9, Galaxy S9+, Galaxy Note 8, and the Galaxy Tab S3.

The game’s still in beta version and the graphics settings are limited for all of the aforementioned Galaxy devices. If you have been wondering how you can install that on your Galaxy device, we have a step-by-step guide to help you on your way.

Here are the steps to download, install and play Fortnite for Android on a Samsung Galaxy device

Step 1: Open the Galaxy Apps from the Samsung folder in the app drawer of your Galaxy Device. If you can’t find the app, just enter ‘Galaxy Apps’ in the search field at the top of the app drawer.

Step 2: There will be a banner ad for Fortnite as soon as you open Galaxy Apps. Click on the banner, then tap the Install and Open button to download the Fortnite Installer app. 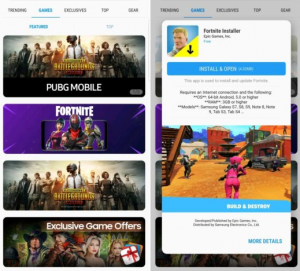 Step 4: You will first have to give it permission to access your device’s storage. After that, the Fortnite Installer app will immediately start downloading the actual Fortnite game. To do so, just follow the prompts on screen and press the Allow button when presented with the option. 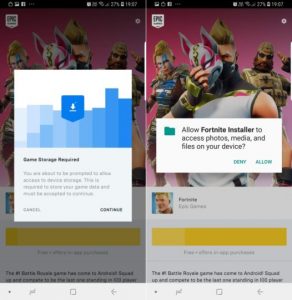 Once Fortnite is installed, you can tap the Launch button inside the Fortnite Installer app to start the game. You can also start the game by tapping its icon in the app drawer. After doing so, Enjoy the game and share your experience with others.