Introducing the new and chic Noir Z9. Now featuring ultimate gloss and style with smooth curves for you to experience state of the art features like Anti Finger Print Technology that defines its futuristic DNA molded into a handset covering all basis impeccably. Special thing is the sleek, lean, thin, lanky and smooth shape and design that makes the second position in the world of the slimmest after OPPO R5 being the slimmest world wide. The dimension of OPPO R5 is 4.5mm and the breadth of QMobile Noir Z9 is just half mm greater than that and is just 5mm in thickness. Other features contain Anti Finger Print Technology that leaves no mark over the Corning Gorilla Glass screen after been touched with fingers and hands. The 4G-LTE provides you the best internet speed which is almost 10 times faster than 3G and has a peak download speed of 50 Mbps. 2GB RAM and 16 GB ROM makes you feel free and need not to worry about running heavy apps, storing media and apps and needs not to be worried about any halt or heat issues. Go for “QMobile Noir Z9 Review” details below.

Like every device, QMobile Noir Z9 also have pros and cons that customers use to watch for.

QMobile Noir Z9 is designed with the best. As it is a recent outcome of the Z series and nearly all the Z series are the flagships for QMobile. So a lot effort is needed to create new patents with new innovations and a module with new features. The dimensions of the sleek Noir Z9 are (142 x 68 x 5)mm. The edges are smoothly curved. Both sides are flat. The back cover is not removable and is glassy. A silver ring moves at the sides and covers the device at 360 degrees that enhances the look of Noir Z9. Noir Z9 is a complete black package with complete black accessories in the box.

Powered with a fast Quad core processor of Qualcomm Snapdragon 410 that is clocked with 1.2 GHz frequency. The tasks are divided in between the quad cores that executes them and aggregate the results in no time. The chip-set is of Qualcomm and the chip-set model is MSM8916. Frequency ranges from 200~1.2 GHz. The GPU is Adreno (TM)306.

QMobile Noir Z9 has 2 GB DDR3 of huge memory that is the need of the day and QMobile does have the knowledge of: How important is the RAM for a smartphone and how fluent is the switching in between apps and games with 2GB RAM. The ROM of QMobile Noir Z9 is 16 GB and 16 GB internal memory is much more for a normal use. QMobile Noir Z9 lacks memory card port and users have to compromise with the 16 GB ROM in Noir Z9.

QMobile Noir Z9 has dual cameras. The Rear cam is 8 MP Auto Focus and is supported with a USB flash light. The interface of the rear camera is shown in the image below.

The 8 MP Rear camera takes beautiful images. The size of its 8 MP Rear cam image is nearly 3.31 MB and the dimensions are (3200 x 2400) pixels. Following is the image been taken with the rear camera of QMobile Noir Z9. Click the image for full view. 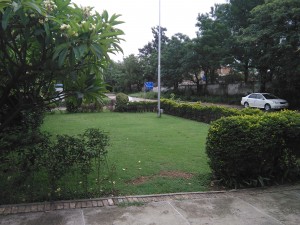 The 5 MP Front camera also takes better images and can be used for taking selfies and social media video chats like Facebook, Skype, IMO etc. The size of its 5 MP Front cam image is nearly 1.54 MB and the dimensions are (2592 x 1944) pixels. Following is the image been taken with the Front camera of QMobile Noir Z9. Click the image for full view. 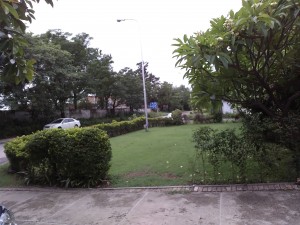 QMobile Noir Z9 is a mono SIM smartphone that takes a Nano SIM in its one-and-only sim slot. There is no space for microSD Card and users have to deal with the 16 GB internal memory only. QMobile Noir Z9 is also 4G-LTE supported and it can have a peak download of up to 50 Mbps and a peak upload of up to 5 Mbps that is huge data to be transferred in between.

The feathery slim and sleek Noir Z9 has been powered by a 2000 mAh battery that runs quite well with the Qualcomm Quad core processor and 2 GB RAM and 16 GB ROM. The battery may be consumed with a faster rate once the device is on the 4G-LTE mode or tethering mode. The battery gives you talk time up to 8 hours and up to 345 hours on stand by mode. The third snapshot shows the internal storage of 16 GB inside Noir Z9 which isn’t been supported with a SD Card.

Featuring a razor thin body of 5mm, QMobile Noir Z9 is a design marvel. Noir Z9 is a handy device from all angles. Being shaped in an aluminium body with a smooth sensation. The back and front are flat end to end. The box contains a super duper flip cover that is different from all others, a super charger of 1 amp charge capacity along with a flat flexible data cable. The hands free are also unique and are sent with the perfect match of HD Audio sound system of QMobile Noir Z9.

Carved from Aircraft Grade Aluminium, the noir Z9 is robust as well as light. Noir Z9 has a better look in hand and is a strong and durable device. Noir Z9 also has another feature of Automatic Polishing for superior finish. Consider the most sleek and fine device in the sole of your hand.

Below mentioned are the side wise dimensions and the look of this stylish smartphone, Noir Z9.

The interface is similar to the interface of QMobile Noir Z8 and QMobile Noir X950. The keyboard and the dial pad been used are the standard ones with the default layouts. The last image shows the camera interface and the features feed in the camera.

Experience brilliance in true HD on the 12.19cm (4.8) HD AMOLED Screen of the QMobile Noir Z9. Keep scratches at bay with the Corning Gorilla Glass 3 protection, which also makes it slimmer by 42.8%.

Integrates its touch response layer into the display itself using ‘Oncell’ technology thus making it slimmer.

As QMobile Noir Z9 is powered by a Quadcore processor which is clocked at 1.2 GHz, a 2 GB RAM and 16 GB ROM along with 8 MP Rear and 5 MP front camera. Thus we can expect a better total in the mid-range smartphones and as expected, the results are better and Noir Z9 takes above 21 thousands score with Antutu which is at its best in the mid-range smartphones. QMobile Noir Z9 has been tested with Antutu, Vellamo and GPU bench mark to check for its different modules and features.

A score of over 21 thousand is a big total for a mid-range smartphone with a 1.2 GHz quadcore processor, 2GB RAM and 16 GB ROM. Internationally compared with international brands, QMobile Noir Z9 makes its place just below ASUS Zenfone 5.

Comparing the performance of QMobile Noir Z9 with Samsung Galaxy S3, We get the following results as shown in the snapshots below.

Powered with the best Qualcomm’s Quad core processor Snapdragon410 processor with the graphics driver as Adreno (TM) 306. Making score over 11,500 is a big total and has the following results. The comparison has been made with QMobile Noir i9 which was also a device with better display.