As reported by authorized market researcher Gartner, global Smartphone transaction has increased by 4.3% in the second quarter of 2016. Samsung Again Beats Apple as a Smartphone Market Leader in Q2-Gartner. Apple suffered a slight decline; during the past year, the company’s market share fell from 14.6% to 12.9%.

According to Gartner, 5 of the top 10 Smartphone makers have seen a notable growth in their sale margin. These smartphone makers are Huawei, Oppo, Xiaomi, Vivo, and Samsung. Moreover, between April to June, total 344 million units Smartphones have sold out, giving mobile marketplace around 4.3% hike in sale rate.

Samsung is still the first with 22.3% market share, Apple is in the second place having 12.9% shares. Huawei holds 8.9 percent of the share, Oppo 5.4 percent and holds 4th position. In the fifth place is Xiaomi with 4.5 percent of global market share. 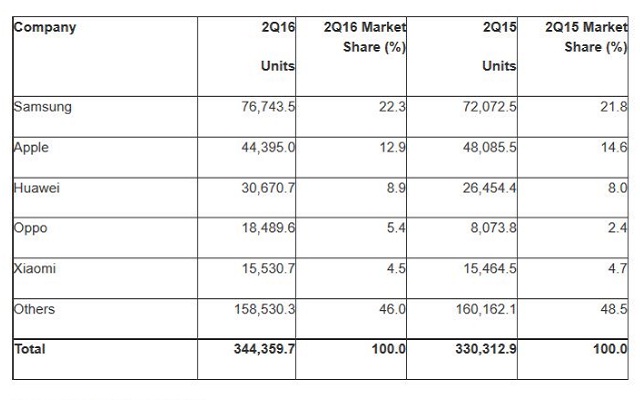 Demands for expensive Smartphones sluggish in the Q2 of 2016 as customers are waiting for new and budget-friendly handsets launches in the second half of this year.