Smartphones have become an integral part of our lives. They have changed the way people used to communicate with each other. Though there is a noteworthy gap between developed and emerging countries, but still it is winding up speedily.

A Pew Research Center study based on a survey of 40 countries in Spring 2015, places worldwide adult smartphone possession at 43%.

Smartphones Lessening the Digital Disparity Across the World: Report

With almost 1.4 billion smartphones retailed during 2015, smartphones sales are thriving and the statistic is anticipated to be higher this year. Still Richer economies have greater level of smartphone ownership, with South Korea at the top with more than 88% of the people possessing a smartphone.

Of the important regions, the United States stands first with 72%, followed by Europe 60% and the Middle East 57%. 43% of Latin Americans own a smartphone which is less than half of the population. People living in the Asia/Pacific mostly have a mobile phone rather than a smartphone, whereas in Africa less than one in five people use a smartphone.

Pew records that there is a strong association between country wealth and smartphone ownership, which relates with the digital divide for internet connectivity.

Smartphone possession rates have plummeted in different countries since 2013 and the report reveals just how rapidly the discrepancy is retreating.

Turkey has witnessed proprietorship augment by 42 percentage points, Malaysia by 34, and Brazil and Chile by 26. 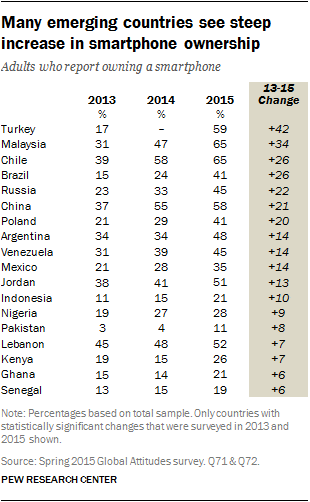 As a matter of fact in emergent and industrialized countries the average number for smartphone ownership has increased from 21% to 37% within two years.