Sony launched Xperia XA2 back in January. According to the latest reports, Sony is working to expand its XA series. Sony Xperia XA3 & XA3 Ultra will be the next two upcoming phones by Sony. There had been a lot of rumors and leaks about the duo. A few days back, Sony Xperia XA3 appeared on Eurasian Listing. Then some renders unveiled the specs of the upcoming phones. Recently, some cases of the upcoming smartphones showed up. They confirmed that both phones will feature the Dual Camera Setup.

Some new case renders from a Chinese company showed up today. They confirmed that both handsets will sport Dual rear camera setup. Let’s have a look at the cases: 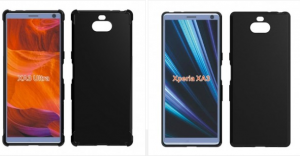 According to previous reports, Sony Xperia XA3 will have a 5.9” screen with 1,080 x 2,160px resolution (18:9). The handset will be powered by a Snapdragon 660 chipset with 6GB of RAM. The phone will feature the latest Android 9.0 Pie straight out of the box. Furthermore, the smartphone will have a dual camera at the back and the side-mounted fingerprint reader. The Xperia XA3 will measure 155.7 x 68.3 x 8.4mm.
On the other hand, Sony Xperia XA3 Ultra will be larger with a 6.5-inch screen having 1080×2160 resolution and 18:9 aspect ratio. The XA3 Ultra is said to measure 167.4 x 73.3 x 8.3 mm. Furthermore, it will also have a dual rear snapper- so there’s definitely going to be a camera bump. The fingerprint sensor will be placed on the right side of the device, in between the power button and volume rocker.  Moreover, a USB-C port will be placed on the bottom. The XA3 Ultra is also expected to be powered by Qualcomm’s Snapdragon 660 SoC and will have up to 6GB of RAM. In addition to that, it will probably run Android 9 Pie.
We can expect to see the devices by the start of next year. However, there are still no words about their launch date yet.