WhatsApp multi-device support is expected to roll out to the Beta version of the application very soon. The company chief,  Will Cathcart, and Mark Zuckerberg have officially announced that the feature is expected to roll out within the next two months. It seems like, the new feature will not be available to more than one phone. According to the latest report, WhatsApp multi-device Support will be limited to one phone per account.

A recent screenshot of the feature was shared by WABetaInfo. The screenshot shows that the multi-device support on WhatsApp will initially work on four devices and a smartphone at once. It means that the feature might not support multiple smartphones initially. The other device formats will include WhatsApp Web, WhatsApp Desktop and Portal only. 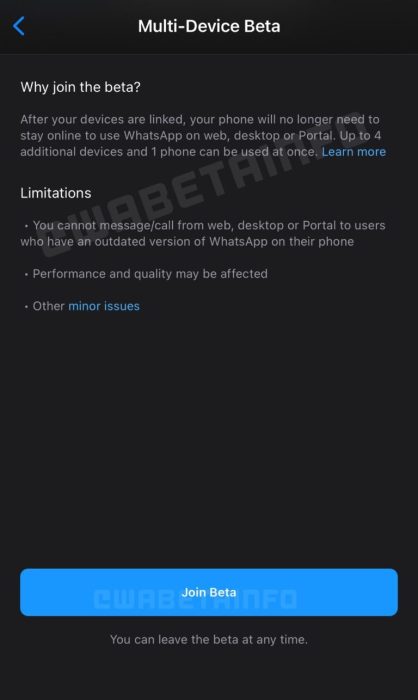 Although, the feature is available on the beta app, but is not functional yet. This implies that we may get the new feature in the next two months, but it will still take time to get this feature on multiple smartphones.

Anyhow, a new feature will allow users to use the app on multiple devices without having an internet connection. Similarly, WhatsApp is also working on a number of new features. WhatsApp will also enable users to switch their chat history between iOS and Android devices.

Moreover, WhatsApp has also rolled out a new ‘archived chats’ tab for iOS a few days ago. With the help of this new feature, every time any user receives a message from an archived chat, it won’t be unarchived automatically.

Check Also: WhatsApp for iOS to Get Search for Stickers Shortcut