It has been rumoring from some days that WhatsApp will send a notification when users take a screen shot of the conversation. Users saw this being widely shared on Facebook and WhatsApp chat groups.

The news that from February 5 onwards WhatsApp will notify users about chat screenshot isn’t valid. As this news was reported on 8Shit no other news site reported it.

WhatsApp Will Not Notify When Someone Screenshots Your Chat

According to the 8shit.net report, Jan Koum, the CEO of Whatsapp has announced to add the feature in the next update,

“The functioning is simple, just like the blue tick: You will have the option activated by default. If it’s checked, you’ll be notified if someone screenshots your conversation, and others will be notified if you screenshot theirs. If it’s unchecked, no one gets notified.” 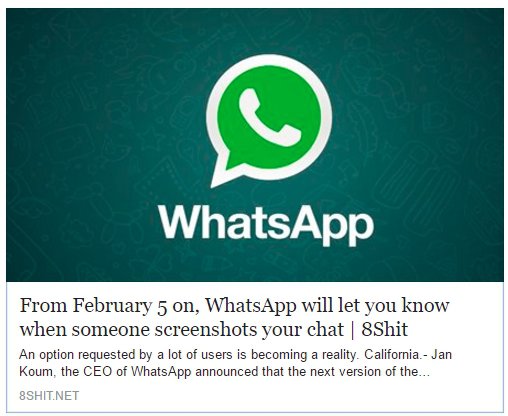 But no such news related to the screenshot notification was seen on WhatsApp official site. Such fake news is not uncommon. A similar news was reported back in November. The news was about Instagram notifying users when they take screenshot of their pictures. Later on it was clarified by Instagram that there was no truth in such reports.

Whether there should be a screenshot notification feature on Whatsapp or not? This is certainly a user-requested feature, but not everyone would want it. The feature will have its own pro and cons, similar to the read receipts feature, which is there on Whatsapp. So lets wait and see how WhatsApp is going to respond to this issue.