Samsung just announced a new version of its recently released Galaxy Watch called Galaxy Watch Golf Edition. As its name suggests, this device is specially designed for golf fans. This Galaxy watch is the successor of the last year’s Gear S3 Golf Edition and is only available in South Korea initially.

The watch itself is essentially the same as the vanilla Galaxy Watch plus the smart Caddie app that makes navigating through golf courses a lot easier. Additionally, the app can do record and shot tracking so you can track your progress. The Smart Caddie contains information about 60,000 golf courses around the world. Moreover, according to the Samsung, the battery life will be just enough to get you through 54 holes (or three full rounds). 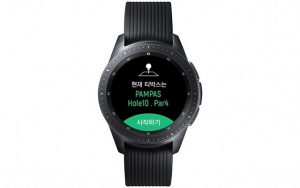 The price for the 46mm variant is around $367 while the 42mm sells $351. However, there is no information about when the watch will be available in other markets.

Samsung is also working to launch Galaxy S10 in Q1 2019. It will be Samsung’s first device with an in-display fingerprint reader. Now, the new reports revealed that Samsung Galaxy S10 will come in three variants. All three Galaxy S10 smartphones named SM-G970F, SM-G973F, and SM-G975F.